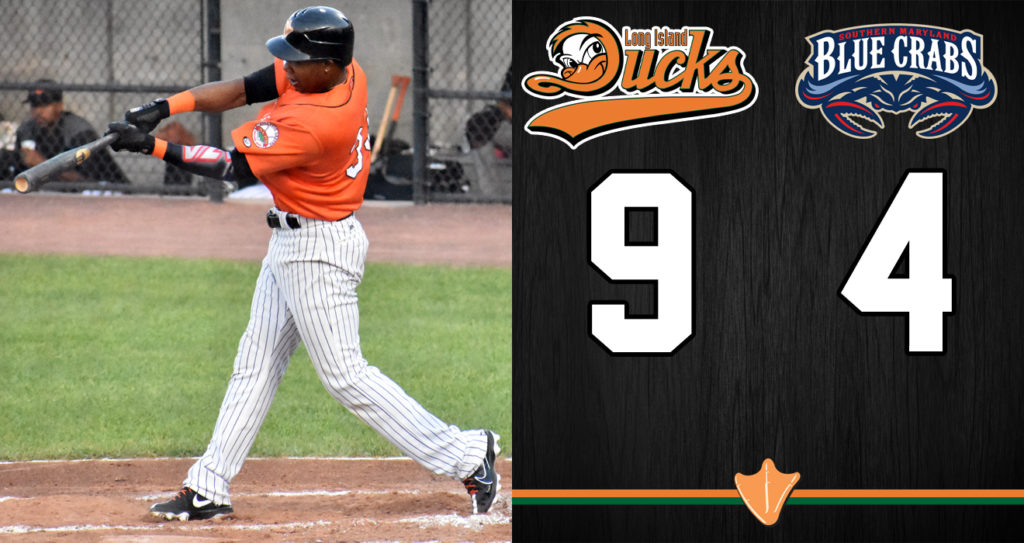 Southern Maryland jumped out to a 4-0 lead in the first inning against Ducks starter Ryan Meisinger on Alex Crosby’s two-run single and a fielding error that plated Crosby and Jared Walker. Long Island got one of the runs back in the bottom of the inning on Sam Travis’ RBI groundout to Blue Crabs starter Alex Merithew. Kevin Whatley followed one inning later with a two-run home run to right field, closing the gap to 4-3.

The Ducks took their first lead of the night at 6-4 in the sixth when Sam Travis hit a two-run home run to right-center, and Deibinson Romero followed immediately thereafter with a solo homer to left. Alejandro De Aza stretched the lead to 8-4 in the seventh with a two-run homer of his own to right. Carlos Castro then rounded out the scoring with a solo homer to left-center in the eighth.

Meisinger did not factor into the decision but lasted five innings, allowing four runs (two earned) on four hits and three walks while striking out seven batters. Chris Cepeda (2-0) picked up the win after pitching a 1-2-3 sixth inning, striking out one. Merithew (1-2) took the loss, conceding eight runs (six earned) on 10 hits and a walk over seven innings with four strikeouts. Long Island’s bullpen combined to retire all 12 batters they faced.

The Ducks and Blue Crabs continue their three-game series on Saturday night. Game time is slated for 6:35 p.m., with the Fairfield Properties Ballpark gates opening at 5:35 (5:20 for full season ticket holders). Following the game, all fans in attendance will be treated to a Fireworks Spectacular, presented by NYCB. It’s also a Lucky Seat Saturday, presented by Long Island MacArthur Airport. During the game, the Ducks will be selecting a lucky fan in the ballpark, who will win a free roundtrip for two to any of Breeze Airways’ 28 destinations. Left-hander Stephen Tarpley (3-4, 3.68) takes the mound for the Ducks against Blue Crabs lefty Mitch Lambson (5-5, 4.18).