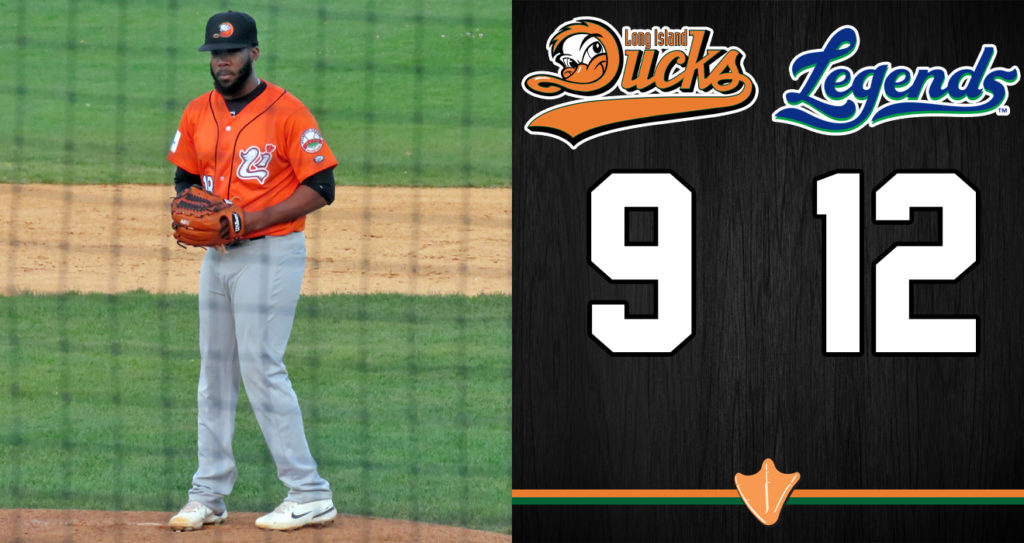 (Lexington, Ky., May 1, 2022) – The Long Island Ducks were defeated by the Lexington Legends 12-9 on Sunday afternoon in the rubber game of a three-game series at Wild Health Field.

The Ducks jumped out to a 4-0 lead in the first inning against Legends starter Mason Cole. Deibinson Romero’s RBI single, Sam Travis’ RBI double and Joe DeCarlo’s two-run single highlighted the inning. Lexington got on the scoreboard in the bottom of the first on a solo home run to left field by Courtney Hawkins off Ducks starter Akeel Morris. Vladimir Frias then restored the Ducks four-run lead in the fourth with a two-out RBI double down the right field line.

Jose Briceno’s solo homer to left in the fourth trimmed Long Island’s lead to 5-2, but a solo blast to left by Romero in the fifth pushed the Ducks advantage back up to four. It stayed that way until the bottom of the sixth when Lexington scored eight runs to take a 10-6 lead. Blake Swihart’s two-run home run and three-run homers from Cesar Cuevas and Briceno did the damage.

Long Island rallied for three runs in the eighth on Frias’ RBI single and Dustin Woodcock’s two-run single, closing the gap to 10-9. However, a two-run homer to left by Hawkins in the bottom of the frame put the game out of reach.

Neither starter factored into the decision. Morris pitched five innings of four-run ball, allowing six hits and three walks while striking out five. Cole lasted four and two-thirds innings, yielding six runs on five hits and three walks with two strikeouts. Jalen Miller (1-1) picked up the win, retiring all four batters he faced while striking out three. Anderson DeLeon (2-1) took the loss, surrendering six runs on four hits and two walks in one inning. Yaramil Hiraldo collected his first save with one and two-thirds innings of scoreless relief.

Following a day off, the Ducks will continue their road trip on Tuesday night when they open a three-game set with the High Point Rockers. First pitch is scheduled for 6:35 p.m. at Truist Point. Fans can follow all the action on the Long Island Ducks Broadcast Network. Live streaming HD video and audio will be available via BoxCast on LIDucks.com as well as on the Ducks official Facebook page and YouTube channel. Right-hander Brett Kennedy (0-0, 2.00) gets the start for the Ducks against a Rockers starter to be determined.