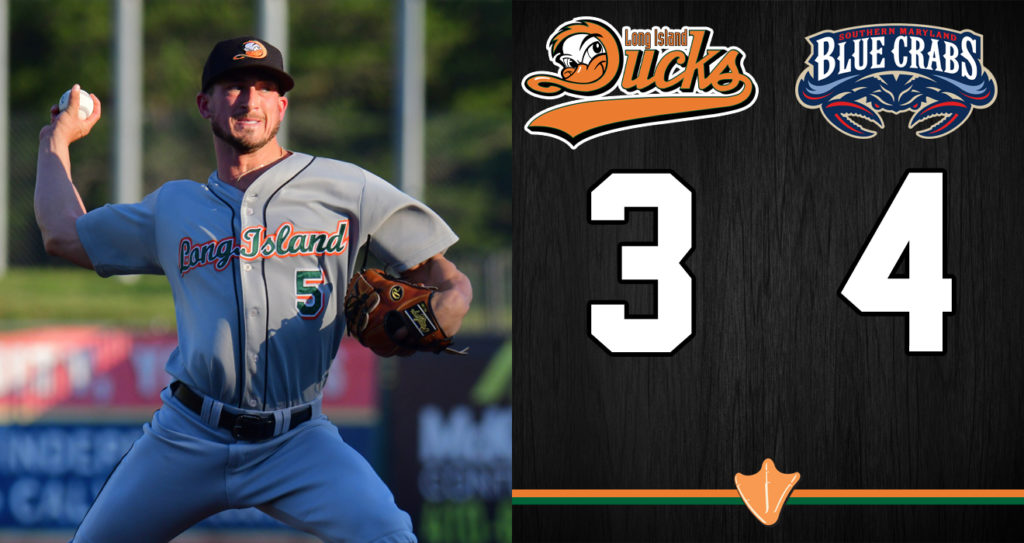 (Waldorf, Md., July 20, 2022) – The Long Island Ducks were defeated by the Southern Maryland Blue Crabs 4-3 on Wednesday evening in the middle game of a three-game midweek series at Regency Furniture Stadium.

Southern Maryland took a 1-0 advantage against Long Island starting pitcher Joe Iorio in the bottom of first thanks to a sacrifice fly off the bat of Zach Collier that plated Jack Sundberg after he led off the frame with a triple. The Ducks tied the game at one in the second against Blue Crabs starter Daryl Thompson when Carlos Castro belted a leadoff home run to left centerfield for his second roundtripper in his last three games.

The Flock jumped ahead 2-1 in the third as Sam Travis drove in Vladimir Frias with an RBI base knock, but the Blue Crabs got even at two apiece one half inning later courtesy of Collier’s second consecutive sacrifice fly. In his first at bat of the 2022 campaign, Iorio put the visitors ahead 3-2 when he launched a solo home run to left centerfield, one of two hits in the ballgame for the Ducks pitcher. Braxton Lee’s triple in the sixth tied the game once again this time at three, and a wild pitch thrown by Edubray Ramos plated Ryan Haug with what proved to be the winning run as Southern Maryland had their second straight come-from-behind win in as many nights against their North Division rival, with both triumphs being of the one-run variety.

Iorio registered a no-decision in the contest, giving up three runs on four hits in five and one-third innings pitched, walking two and striking out four. Thompson (10-2) was the winner, allowing three runs on 12 hits (two home runs) across seven innings of work, striking out a pair of batters. Ramos (2-2) was tagged with the loss, surrendering one run on one hit in one inning pitched, walking and striking out one. Mat Latos earned his Atlantic League leading 21st save after not allowing a run in the ninth on two hits and a walk while striking out two batters, including Ramos to end the game with the bases loaded. Alejandro De Aza led the way offensively for Long Island with four hits and a stolen base.

The Ducks and Blue Crabs wrap up their three-game set on Thursday night. First pitch is scheduled for 6:35 p.m. from Regency Furniture Stadium. Fans can follow all the action on the Long Island Ducks Broadcast Network. Live streaming HD video and audio will be available via BoxCast on LIDucks.com as well as on the Ducks official Facebook page and YouTube channel. Left-hander Bennett Parry (0-1, 6.94) gets the start for Long Island against Southern Maryland righty Adrian Cook (2022 Blue Crabs Debut).