KENNEDY MOWS DOWN FERRYHAWKS TO COMPLETE THE SWEEP 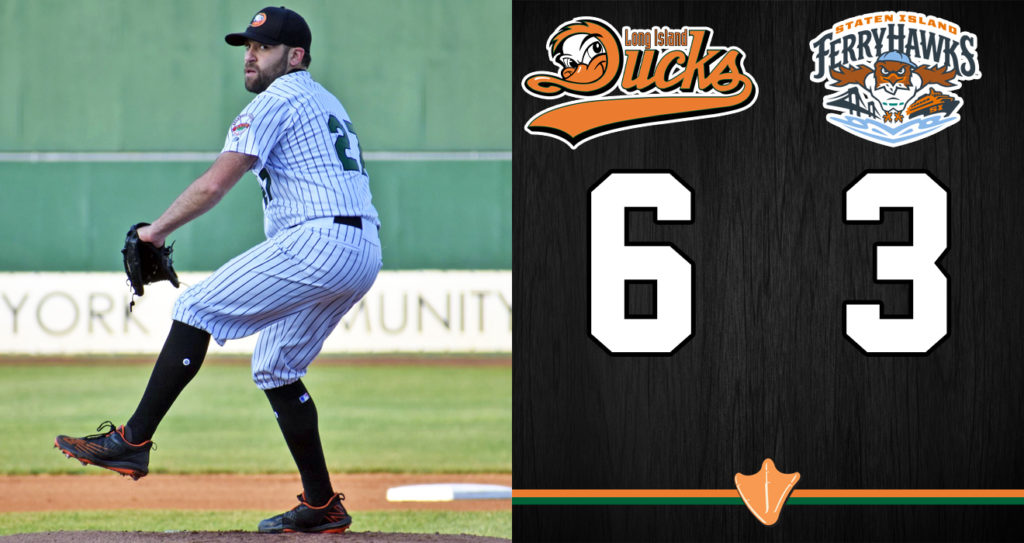 (Central Islip, N.Y., May 19, 2022) – The Long Island Ducks defeated the Staten Island FerryHawks 6-3 on Thursday night in the final game of a three-game series at Fairfield Properties Ballpark.

The Ducks took an early 1-0 lead in the first inning, as Johnni Turbo scored from third on a fielding error by Brandon Wagner. A sacrifice fly to left field off the bat of Sam Travis in the third extended the Ducks lead to two. A four-run fourth against FerryHawks starter Alex Vargas gave the Ducks a 6-0 advantage. RBI singles by Turbo and Travis, a sac fly off the bat of L.J. Mazzilli and an RBI double by Dustin Woodcock did the damage.

Staten Island got on the scoreboard in the sixth on Alfredo Reyes’ run-scoring groundout off Ducks starter Brett Kennedy. Rymer Liriano hit a two-run homer to left in the ninth, closing the gap to 6-3, but the FerryHawks were unable to pull even.

Kennedy (2-1) earned the win, tossing seven innings of one-run ball, allowing five hits and no walks while striking out seven. Vargas (0-3) suffered the loss, surrendering six runs on seven hits and four walks in three and two-thirds innings. Sandy Baez picked up his third save of the season after recording the final out of the game.

Turbo and Woodcock led the Flock offensively with two hits and an RBI each. Mazzilli and Travis each drove in two runs.

The Ducks hit the road on Friday night to open a three-game series against the Southern Maryland Blue Crabs. First pitch is scheduled for 6:35 p.m. from Regency Furniture Stadium. Fans can follow all the action on the Long Island Ducks Broadcast Network. Live streaming HD video and audio will be available via BoxCast on LIDucks.com as well as on the Ducks official Facebook page and YouTube channel. Right-hander Akeel Morris (0-1, 5.49) gets the start for the Ducks against Blue Crabs righty Daryl Thompson (2-1, 3.23).