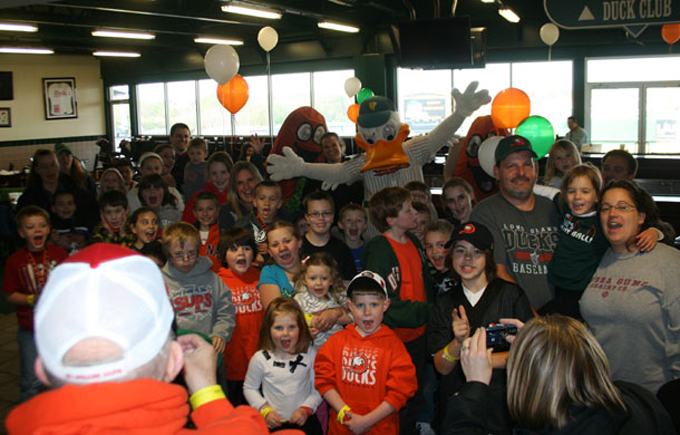 “Kids Club members look forward to days like this each year,” says Ducks Community Relations Assistant Taylor Turner. “Celebrating QuackerJack’s birthday at the ballpark is just one of many great amenities of a Kids Club membership.”

As Kids Club members entered the park, they were handed their annual gift bag full of cool gifts that are exclusive to those who join. In addition, they had the chance to spend time with QuackerJack throughout the party, posing for pictures and singing “Happy Birthday” to their favorite mascot, as well as bounce around in the brand new Monster Mini Golf Bounce House. Centerplate, the official concessions partner of the Long Island Ducks, provided complimentary food for all of those in attendance.

Check out all of the fun Kids Club Members had by CLICKING HERE.

There is still time to sign up and be a part of the Long Island Ducks/Bethpage Kids Club for this season. It’s the perfect way for any Ducks fan 14 and younger to show how much they love Long Island’s hometown team, all for one affordable price. Signing up is easy! Just CLICK HERE, fill out the Kids Club application form, and send it to the Ducks.

The seasonal membership fee is just $25 and entitles those in the Kids Club to:

-An Official Long Island Ducks/Bethpage Kids Club Membership Card & lanyard -A voucher redeemable for a ticket to a regular season home game during the 2012 season. (Based on availability. Members must present membership card at box office to redeem ticket.)

-An Official Long Island Ducks/Bethpage Kids Club Gift (CLICK HERE to check out this year’s gift!) -A 2012 Long Island Ducks Commemorative Yearbook
-The opportunity at every Ducks home game to win an autographed ball. (Member must bring membership card to the game and sign in at Ticket Kiosk before the 3rd inning to be eligible.)
-The Quarterly Kids Club Newsletter: The Duck Pond -A 10{d19d1e12342262c479f9972a08c42c67c928132b64b850956d7c8317104b5166} Discount on select merchandise from the Waddle In Shop -An invitation to “Kids Club Day” at Bethpage Ballpark
-“Kids Club Day” to include:
-Tour of Bethpage Ballpark and opportunity to run bases
-Group Photo with QuackerJack and Ducks players to be placed on website (CLICK HERE to see last year’s photo!)