LAST CHANCE TO VOTE FOR YOUR DUCKS! 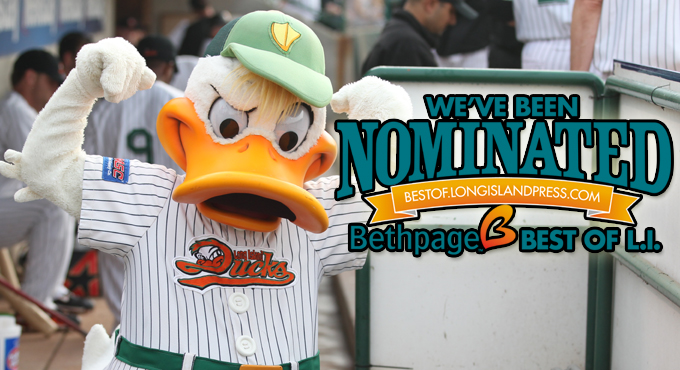 Ducks among nominees for “Best of Long Island” awards

For a fifth consecutive year, the Ducks have been given their own category: Best Long Island Duck. Maybe it was Ray Navarrete, who led the Ducks in batting average and RBI while setting an Atlantic League record in doubles. How about Brandon Sing, who crushed a team-high 26 homers during the regular season? Or was it Dan Lyons, who took home Atlantic League Championship Series Most Valuable Player honors? Several members of the Flock are nominated in this category, so choose your favorite! In addition, Long Island’s favorite mascot, QuackerJack, will look to defend his title as Best Long Island Mascot. Whether leading the fans in a “Let’s Go Ducks” chant or racing a young fan around the bases, QuackerJack is always putting smiles on the faces of Long Islanders!

The Ducks have also been nominated for a second consecutive season for Best Long Island Based Website. In 2012, the Ducks partnered up with Infinity Pro Sports and re-launched their official team website, www.liducks.com. Featuring more interactive capabilities, social media components and a state-of-the-art look and feel, the new site has been lauded by fans as the sharpest look ever! Finally, the Ducks were nominated this year for Best Soft Pretzel. Whether in a traditional pretzel shape or as a long braid, the soft pretzels provided by J & J Snacks at Bethpage Ballpark are a sought after treat among Ducks fans all season long.

Remember, voting runs through this Saturday, December 15, so be sure to vote today for your Long Island Ducks!