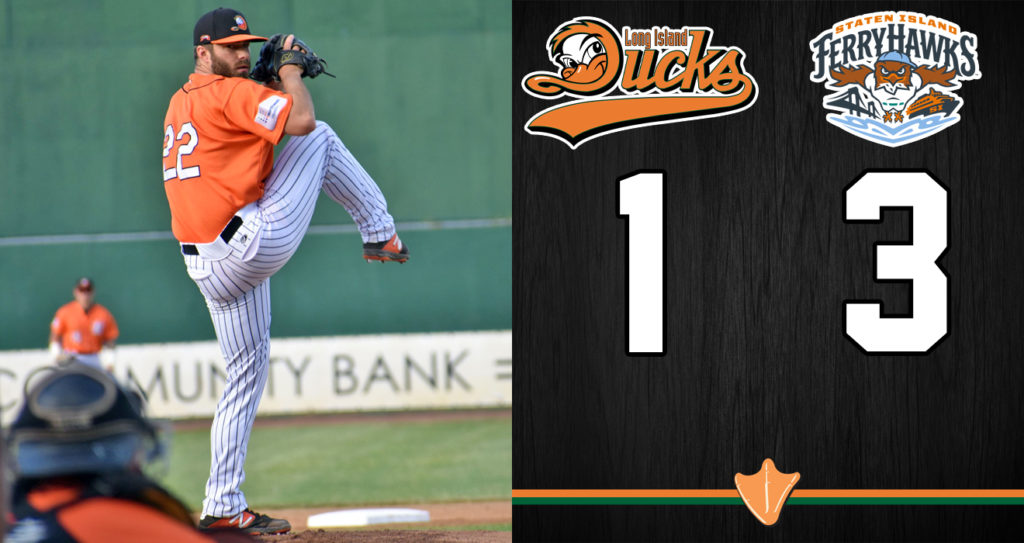 (Central Islip, N.Y., July 6, 2022) – The Long Island Ducks were defeated by the Staten Island FerryHawks 3-1 on Wednesday night in the opener of a two-game series at Fairfield Properties Ballpark.

Staten Island broke a scoreless deadlock in the fourth inning on an RBI single to left field from Justin O’Conner off Ducks starter Cody Beckman. Long Island tied the game in the sixth on a two-out RBI single up the middle by Sam Travis off FerryHawks starter Matt Solter. The FerryHawks regained the lead for good though in the seventh on an RBI double to right by Antoine Duplantis and a wild pitch that scored Duplantis.

Alejandro De Aza led the Flock offensively with a pair of hits.

The Ducks and FerryHawks wrap up their two-game set on Thursday afternoon. Game time is slated for 1:00 p.m., with the ballpark gates opening at 12:00 for all fans. It’s a Thirsty Thursday at the ballpark! Fans will be able to enjoy a special buy one, get one half-price offer on Smirnoff Seltzer in the ballpark throughout the game. In addition, the Duck Club restaurant/bar on the suite level will be open for all fans to enjoy. Right-hander Joe Iorio (6-1, 4.01) takes the mound for the Ducks against FerryHawks righty Hector Guance (1-2, 7.11).