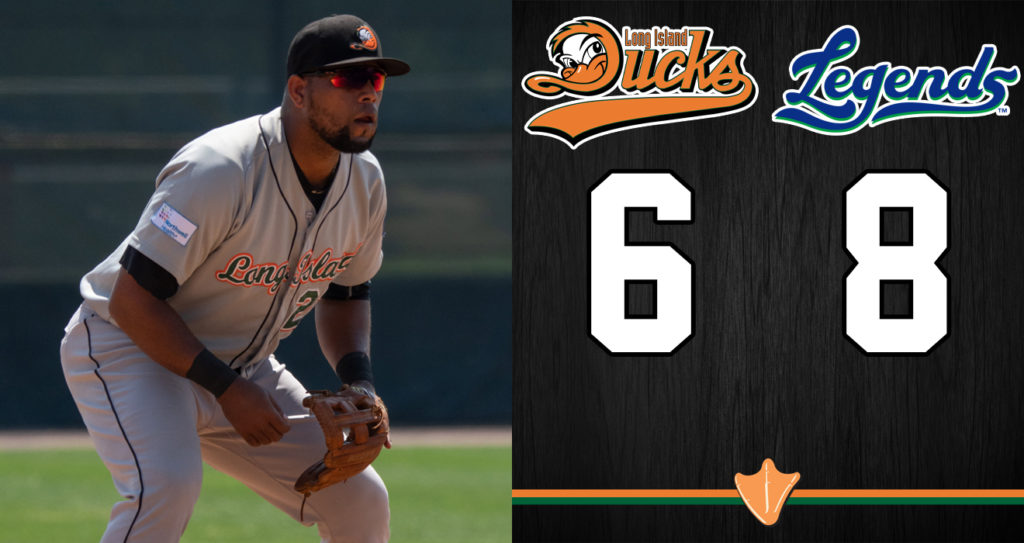 (Lexington, Ky., April 30, 2022) – The Long Island Ducks were defeated by the Lexington Legends 8-6 on Saturday night in the middle game of a three-game series at Wild Health Field.

The Legends took a 1-0 lead in the first inning on Tillman Pugh’s RBI single to left field off Ducks starter Hunter Caudelle. Cesar Cuevas added an RBI double in the second to make it a 2-0 ballgame. The Ducks rallied to tie the game at two with single runs in the third and fourth off Legends starter Jeff Thompson on Johnni Turbo’s run-scoring fielder’s choice and Joe DeCarlo’s RBI single to left-center.

A six-run fourth for Lexington put them back in front 8-2, with Courtney Hawkins’ two-run single and Jose Briceno’s two-run home run to left highlighting the frame. Two-out RBI singles by Deibinson Romero and Sam Travis in the fifth closed the gap to four. Travis’ sac fly to left in the seventh and Daniel Fields’ RBI triple to right-center in the eighth trimmed the Ducks deficit to 8-6. However, Long Island could not even the score.

Caudelle did not factor into the decision, giving up two runs on six hits and a walk over three innings while striking out three. Thompson (1-1) picked up the win, tossing five innings, allowing four runs on eight hits and one walk while striking out eight. Stephen Tarpley (0-1) suffered the loss, surrendering six runs on five hits in one-third of an inning. Austin Adams earned his second save of the season with a scoreless ninth.

Romero led the Flock offensively with three hits, an RBI, a run and a walk. DeCarlo and Fields each added two hits and drove in a run.

The Ducks and Legends wrap up their three-game set on Sunday afternoon. First pitch is scheduled for 2:05 p.m. at Wild Health Field. Fans can follow all the action on the Long Island Ducks Broadcast Network. Live streaming HD video and audio will be available via BoxCast on LIDucks.com as well as on the Ducks official Facebook page and YouTube channel. Right-hander Akeel Morris (0-0, 9.64) toes the rubber for the Ducks against Legends righty Mason Cole (0-0, 2.70).