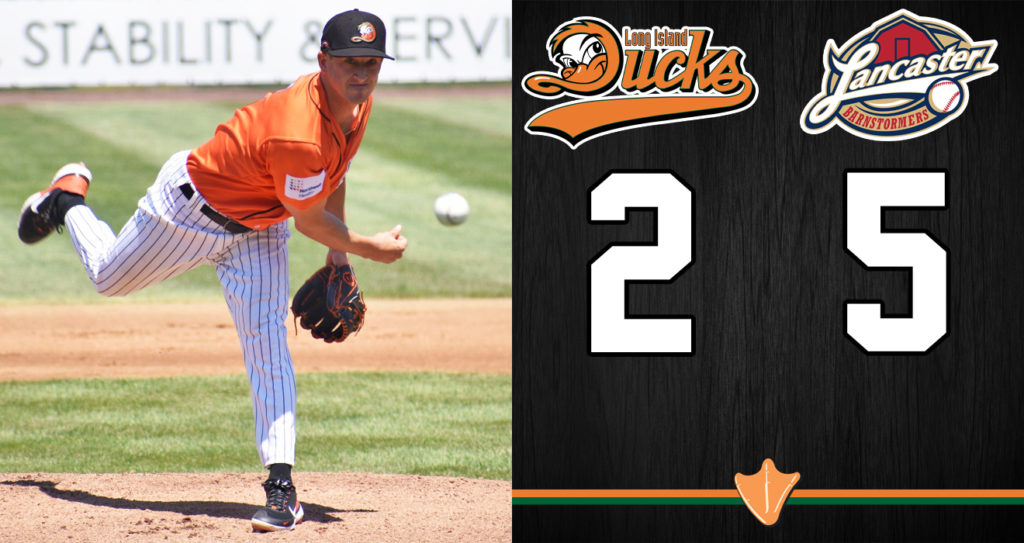 (Central Islip, N.Y., June 26, 2022) – The Long Island Ducks were defeated by the Lancaster Barnstormers 5-2 on Sunday afternoon in the final game of a four-game series.

The Barnstormers opened the scoring in the fourth inning on a two-run double to right field by Trayvon Robinson off Ducks starter Joe Iorio. The Ducks responded with two runs of their own in the bottom of the frame against Lancaster starter Augie Sylk on Sam Travis’ RBI double to left and Vladimir Frias’ sacrifice fly to left.

It stayed that way until the seventh when Melvin Mercedes lifted a sac fly to left, scoring Robinson to put Lancaster in front 3-2. Robinson’s second two-run double to right field on the day extended the Barnstormers advantage to three in the eighth.

Ducks starter Joe Iorio did not factor into the decision but tossed six innings of two-run ball, allowing four hits and three walks while striking out five. Sylk (3-6) earned the win, pitching seven innings of two-run ball, giving up three hits and four walks while striking out five. Ryan Meisinger (0-1) took the loss, yielding three runs on five hits over two innings of relief with two strikeouts. West Tunnell picked up his first save of the year with a scoreless ninth, working around a hit and a walk.

The Ducks hit the road on Tuesday night to open a three-game series against the Staten Island FerryHawks. First pitch is scheduled for 6:30 p.m. at Staten Island University Hospital Community Park. Fans can follow all the action on the Long Island Ducks Broadcast Network. Live streaming HD video and audio will be available via BoxCast on LIDucks.com as well as on the Ducks official Facebook page and YouTube channel. Left-hander Stephen Tarpley (2-3, 3.22) gets the start for the Ducks against a FerryHawks starter to be determined.