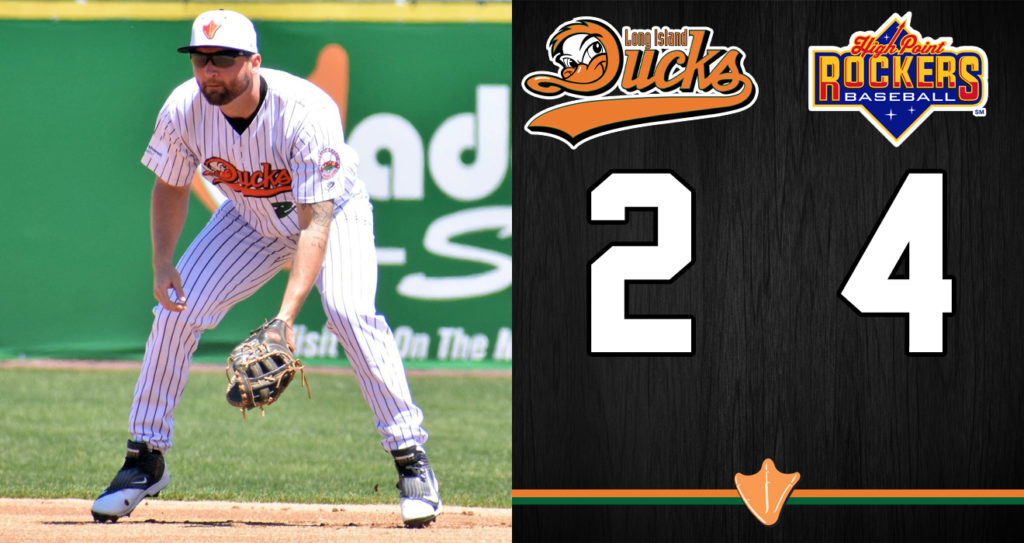 (Central Islip, N.Y., May 15, 2022) – The Long Island Ducks were defeated by the High Point Rockers 4-2 on Sunday afternoon in the rubber game of a three-game series at Fairfield Properties Ballpark.

Tyler Ladendorf put the Rockers on top early with a first inning solo home run to left field off Ducks starter Scott Harkin. Michael Russell’s two-run single to center in the second extended High Point’s lead to 3-0. It stayed that way until the eighth when Ladendorf led off the inning with another solo homer to left.

Long Island closed to within 4-2 in the bottom of the eighth. RBI singles by San Travis to left field and Rusney Castillo to right trimmed the deficit to two, but the Ducks were unable to even the score.

The Ducks continue their homestand on Tuesday night when they open a three-game series against the Staten Island FerryHawks, in the first installment of the “Battle of the Belt” rivalry. Game time is slated for 6:35 p.m., with the Fairfield Properties Ballpark gates opening at 5:35 (5:20 for full season ticket holders). It’s a Triple Play Tuesday at the ballpark! If the Ducks turn a triple play during the game, one lucky fan will be a grand prize winner of $25,000. To be eligible, simply sign up prior to first pitch at the Ticket Kiosk, located on the main concourse next to customer service.