LIN AND THE FLOCK BLAST PAST BLUE CRABS 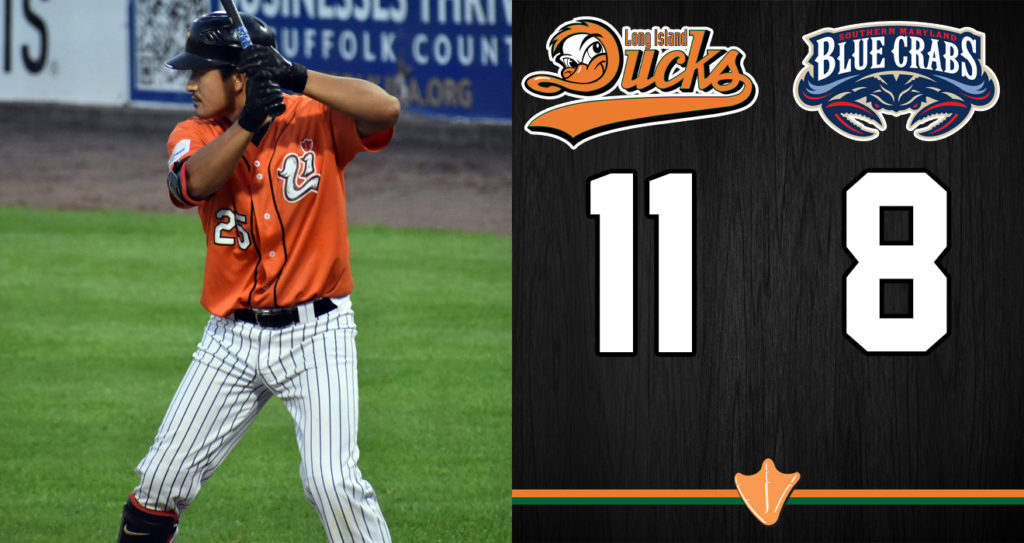 Alejandro De Aza gave the Ducks a 2-0 lead in the first inning with a two-run home run to right field off Blue Crabs starter Alsis Herrera. The Blue Crabs closed to within a run in the third on Braxton Lee’s two-out RBI double to center off Ducks starter Joe Iorio. However, a five-run bottom of the third pushed Long Island’s lead to 7-1. A sac fly to right by Jose Sermo, a two-run single to left by Joe DeCarlo and a two-run homer to right by Tzu-Wei Lin did the damage.

Lin left the yard again in the fifth with a two-run homer to center field, stretching the lead to 9-1. A sac fly to left off the bat of Deibinson Romero in the sixth and a sac fly to right by Sermo in the eighth made it a 10-run game.

Southern Maryland rallied for seven runs in the ninth inning, highlighted by a three-run homer from Michael Wielansky, RBI doubles by Michael Baca and Jared Walker, and an RBI single by Jack Sundberg. However, they could not pull even.

The Ducks and Blue Crabs continue their three-game set on Wednesday night. Game time is slated for 6:35 p.m., with the Fairfield Properties Ballpark gates opening at 5:35 (5:20 for full season ticket holders). It’s Prostate Cancer Awareness Night, presented by Good Samaritan Hospital, and the first 1,000 fans in attendance will receive Drawstring Bags. Fans attending the game will also have the opportunity to undergo free Prostate Cancer screenings, which will include a blood test and digital rectal exam. Additionally, Good Samaritan Hospital will be providing screenings for blood pressure and body mass index. It’s a Lemonade Stand at Main & Vine Wine Down Wednesday and a Waddle In Wednesday at the ballpark as well. Right-hander Scott Harkin (10-7, 4.55) takes the mound for the Ducks against Blue Crabs righty Alex Merithew (7-3, 3.77).