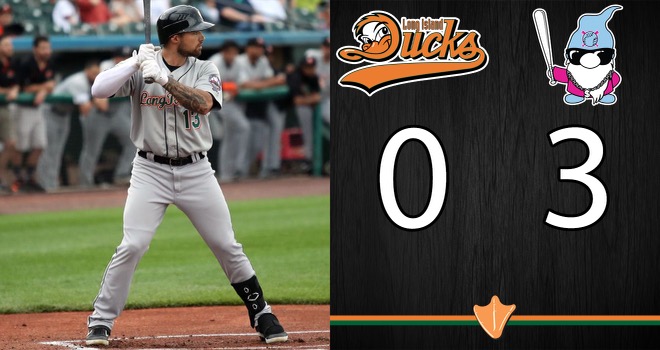 (Lexington, Ky., July 16, 2022) – The Long Island Ducks were defeated by the Kentucky Wild Health Genomes 3-0 on Saturday night in the middle game of a three-game weekend series from Wild Health Field.

Wild Health loaded the bases with nobody out in the bottom of the sixth inning versus Long Island starting pitcher Akeel Morris, who was then lifted for Tyler Webb. Samir Duenez stepped into the batter’s box and cracked a two-run double off the right field wall that plated Chris Shaw and Khris Davis to make it 2-0 in favor of the home team. The Genomes took a 3-0 advantage in the seventh courtesy of a run-scoring double off the bat of Moises Sierra that enabled Teodoro Martinez to cross the plate after he began the inning with a two-base hit of his own.

Morris (4-6) suffered the loss, allowing two runs on six hits in five innings pitched, walking and striking out four. Wild Health starter Max Povse registered a no-decision in the ballgame after tossing five scoreless innings on two hits allowed, walking one while striking out eight. Robbie Ross Jr. (2-1) earned the win out of the bullpen after not allowing a run on two hits surrendered in his one inning of work while Diogenes Almengo shut the door in the ninth for his first save of the season. L.J. Mazzilli led the way offensively with two hits for the Ducks.

The Ducks and Genomes conclude their three-game set on Sunday afternoon. First pitch is scheduled for 2:05 p.m. from Wild Health Field. Fans can follow all the action on the Long Island Ducks Broadcast Network. Live streaming HD video and audio will be available via BoxCast on LIDucks.com as well as on the Ducks official Facebook page and YouTube channel. Left-hander Stephen Tarpley (3-3, 3.29) gets the nod for the Ducks against Genomes righty Elih Villanueva (5-7, 5.76).