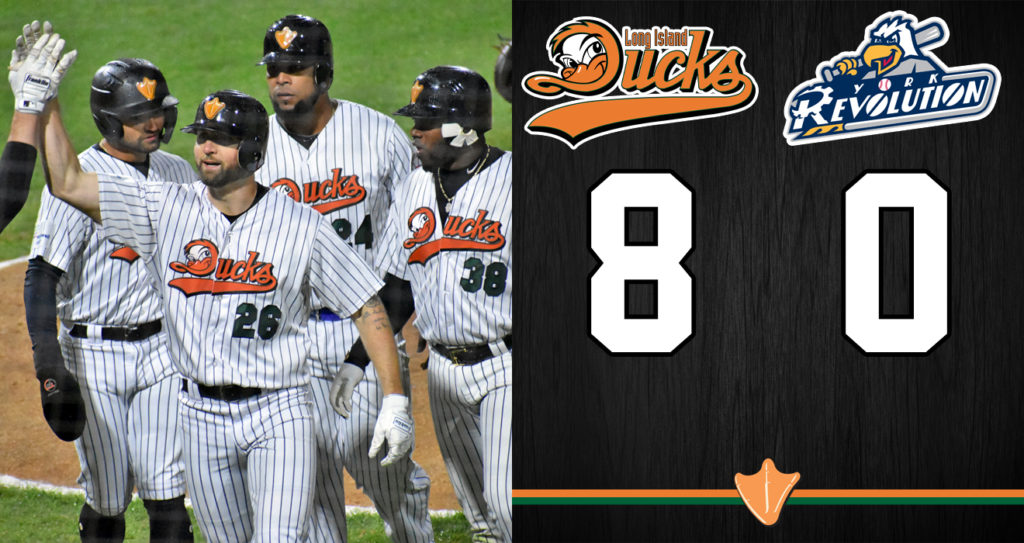 (Central Islip, N.Y., April 23, 2022) – The Long Island Ducks shut out the York Revolution 8-0 on Saturday night in the middle game of a three-game series at Fairfield Properties Ballpark.

Marrero collected another sac fly in the fourth to score DeCarlo, making it a four-run advantage for the Flock. It stayed that way until the bottom of the seventh when Sam Travis uncorked a grand slam over the left field fence, doubling Long Island’s lead to 8-0.

The Ducks and Revolution wrap up their three-game set on Sunday afternoon. Game time is slated for 1:35 p.m., with the Fairfield Properties Ballpark gates opening at 12:35 (12:20 for full season ticket holders). The first 1,500 fans in attendance will receive Ducks Magnet Schedules, courtesy of The QuackerJack Foundation. It’s also a Sunday Family Funday, presented by Bethpage Federal Credit Union. Prior to the game, fans will be invited down for a Catch on the Field from 12:40 to 1:00. After the game, fans are also invited to take part in Kids Run the Bases. Right-hander Scott Harkin toes the rubber for the Ducks against Revolution righty Jorge Martinez.