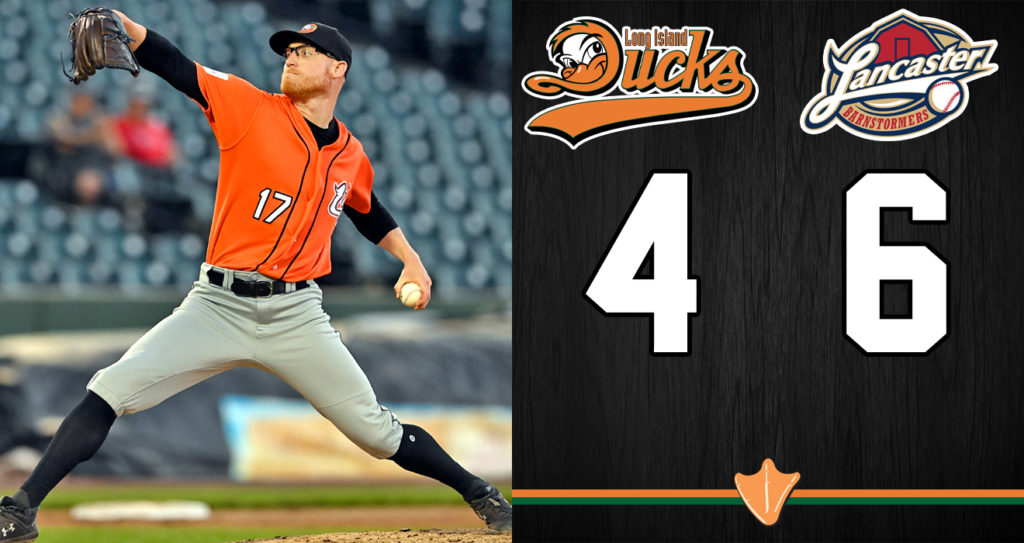 (Lancaster, Pa., May 12, 2022) – The Long Island Ducks were defeated by the Lancaster Barnstormers 6-4 on Thursday morning in the final game of a three-game series at Clipper Magazine Stadium.

The Barnstormers opened the scoring in the second inning on a two-out RBI triple to right-center field by Jake Hoover off Ducks starter Cody Beckman. An RBI double by Melvin Mercedes and a three-run home run to left-center by Anderson Feliz in the third made it 5-0 Lancaster.

The Ducks closed the gap to one with a four-run fifth inning off Barnstormers starter Augie Sylk. Joe DeCarlo’s two-run single, a throwing error by Mercedes that plated DeCarlo and Johnni Turbo’s RBI single did the damage. LeDarious Clark’s RBI double in the seventh pushed lead up to two for Lancaster at 6-4. Long Island loaded the bases with two outs in the sixth and eighth but could not pull even.

Sylk did not factor into the decision, lasting four and one-third innings, yielding four runs (two earned) on three hits while striking out three. Chase Johnson (1-2) got the win with a scoreless seventh inning, facing the minimum three batters. Beckman (1-1) took the loss, conceding five runs on three hits and four walks over three innings with two strikeouts. Scott Shuman earned his fourth save with a scoreless ninth inning.

The Ducks return home on Friday night to begin a three-game series with the High Point Rockers. Game time is slated for 6:35 p.m., with the Fairfield Properties Ballpark gates opening at 5:35 (5:20 for full season ticket holders). It’s an Angela’s Pizza Friday! If the K-Man on the Rockers strikes out during the game, fans will be able to redeem their game ticket for a $13 regular pie (normally $19) at Angela’s Pizzeria in Islip during the rest of the weekend. Right-hander Brett Kennedy (0-1, 4.50) gets the start for the Ducks against Rockers southpaw Justin Nicolino (3-0, 1.90).