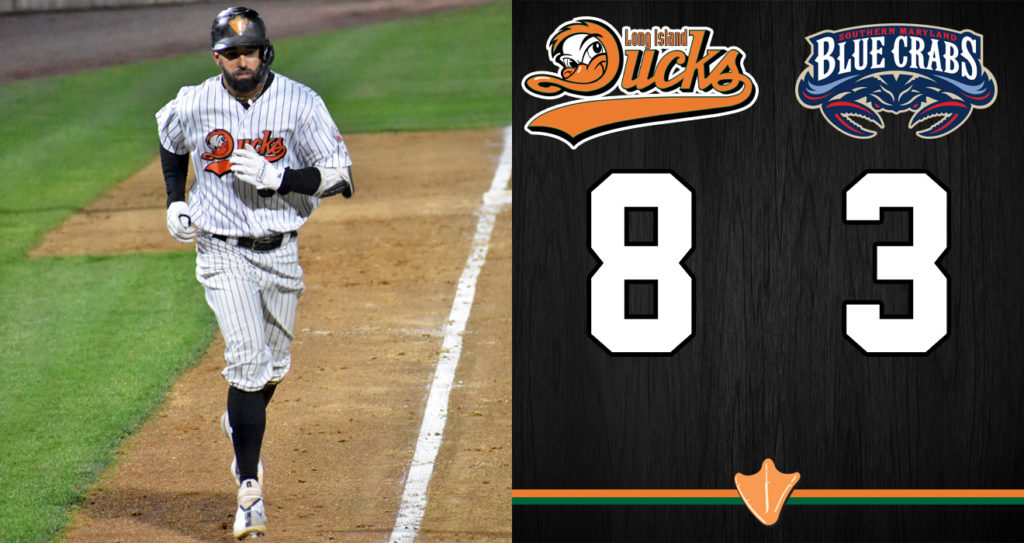 (Central Islip, N.Y., May 26, 2022) – The Long Island Ducks defeated the Southern Maryland Blue Crabs 8-3 on Thursday night in the rubber game of a three-game series at Fairfield Properties Ballpark.

Long Island struck first in the opening inning when Dustin Woodcock doubled and later scored on a wild pitch by Blue Crabs starter Daryl Thompson. Two more runs in the third on a bases loaded walk by Deven Marrero and an RBI fielder’s choice off Woodcock’s bat made it a 3-0 ballgame. The Ducks then put up a three-spot in third, doubling their lead to six. Vladimir Frias’ RBI single to right and Marrero’s two-run single to center did the damage.

Southern Maryland got on the scoreboard in the fifth courtesy of Austin Rei’s two-run single to center off Ducks starter Scott Harkin, closing the gap to 6-2. Alex Crosby’s sac fly to right in the sixth made it a 6-3 game, but the Flock got the run back in the sixth on De Aza’s RBI single to right. Marrero added a solo homer to left leading off the eighth to round out the scoring for the night.

The Ducks continue their homestand on Friday night when they open a four-game series against the Gastonia Honey Hunters. Game time is slated for 6:35 p.m., with the Fairfield Properties Ballpark gates opening at 5:35 (5:20 for full season ticket holders). The first 2,000 fans exiting the ballpark following Friday’s game will receive a Chocolate Bar Giveaway, courtesy of Evolved Chocolate. It’s also an Angela’s Pizza Friday! A player on the Honey Hunters will be designated as the K-Man, and if he strikes out during the game, all fans can show their game ticket to receive half-priced appetizers on all to-go orders throughout the rest of the weekend at Angela’s Pizzeria of Islip. Right-hander Anderson DeLeon (2-1, 3.72) gets the start for the Ducks against Honey Hunters lefty Michael Gunn (2-0, 1.59).