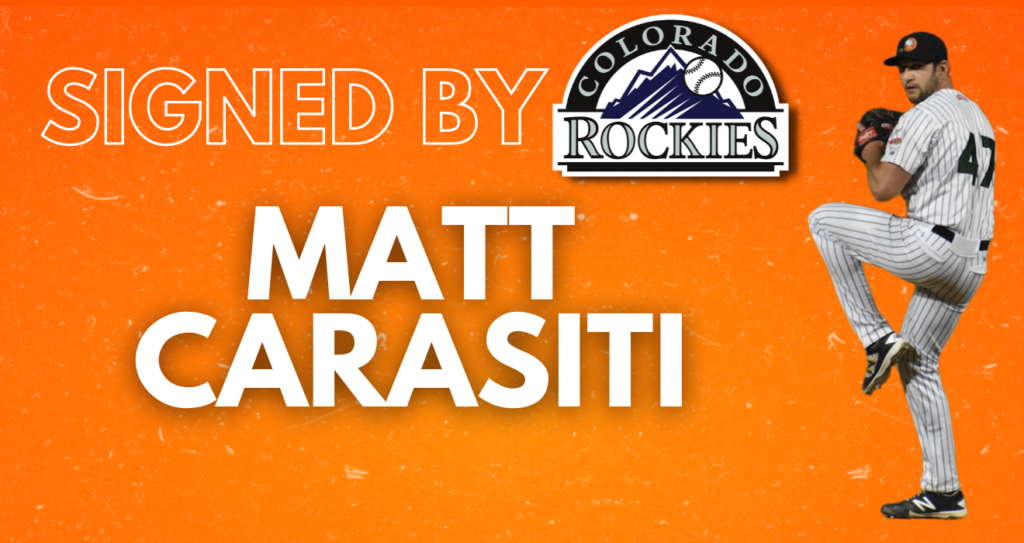 (Central Islip, N.Y., Dec. 21, 2022) – The Long Island Ducks today announced that right-handed pitcher Matt Carasiti has been signed by the Colorado Rockies. He has also been invited by the team to spring training in Scottsdale, Ariz.

“Matt did an outstanding job with us during the 2022 season,” said Ducks President/GM Michael Pfaff. “We congratulate him on this opportunity and wish him the best of luck with the Rockies organization.”

Carasiti joined the Ducks in August of 2022 and appeared in nine games with the Flock. He combined to allow just four runs (two earned) over 11.1 innings of work, good for a 1.59 ERA. Along with a 1-1 record, the 31-year-old recorded one save, a 0.97 WHIP, a .163 opponents’ batting average and struck out 14 batters while walking four. He made five consecutive scoreless appearances to begin his Ducks career while throwing a fastball that reached 98 miles per hour.

The New Britain, Conn., native previously spent parts of two seasons in the Major Leagues. He appeared in 19 games with the Rockies during the 2016 season, striking out 17 batters in 15.2 innings. He later pitched in 11 games (five starts) with the Seattle Mariners in 2019, posting a 4.66 ERA and striking out 10 in 9.2 innings. Prior to joining the Ducks, the St. John’s University alum made 23 appearances with Triple-A Sacramento in the San Francisco Giants organization, going 3-2 with one save and 28 strikeouts over 21.2 innings. Carasiti was originally selected by the Rockies in the sixth round of the 2012 amateur draft.

Celebrating its 25th Anniversary Season in 2023, the Atlantic League is Major League Baseball’s first Professional Partner League, a player gateway to the major leagues, and a leader in baseball innovation. ALPB has sent over 1,200 players to MLB organizations while drawing more than 45 million fans to its family-friendly ballparks throughout its 25-year history. Please visit https://www.atlanticleague.com.