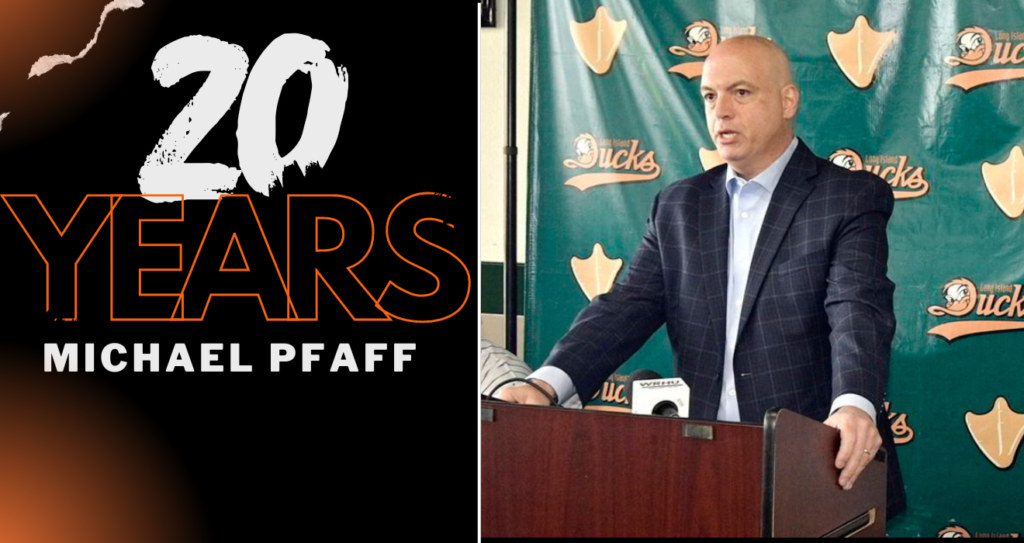 “Michael has done a tremendous job in all facets since joining the club in 2002,” said Ducks Founder/CEO/Owner Frank Boulton. “He demonstrates a work ethic like no other every year. His passion for and loyalty to the Ducks organization are second to none. We congratulate him on reaching this momentous occasion of his professional career.”

Pfaff originally joined the Ducks on November 18, 2002, in the role of Media Relations Manager, serving in that role for the Ducks and D-3 Soccer League club, the Long Island Rough Riders. He served in a media relations capacity until his promotion to General Manager of the Ducks in 2006. He was later named the club’s President in 2011.

Under Pfaff’s leadership, the Ducks have led the Atlantic League in attendance nine times, became the first team in league history to eclipse the 8 million fan mark, and are soon to welcome their league record 700th sellout crowd. He is the first-ever three-time winner of the Atlantic League Executive of the Year Award (2008, 2010, 2016) and has also been named a “40 under 40” award winner by the Long Island Business News.

Additionally, Pfaff has overseen tremendous growth of the QuackerJack Foundation during his tenure. Founded in 2003, the team’s charitable arm has continued to expand its efforts and now contributes to over 800 non-profit and community organizations each year, while bringing awareness to worthy programs and causes in need of assistance on Long Island.

Prior to joining the Ducks, Pfaff worked at the National Football League Commissioner’s Office in New York City for seven years (1995-2002). During his time at the NFL, he was assigned to work two AFC Championship games, three Super Bowls and six NFL Drafts. The Manhasset native earned his Bachelor’s Degree at St. John’s University and currently resides in Sayville with his wife and their three children.