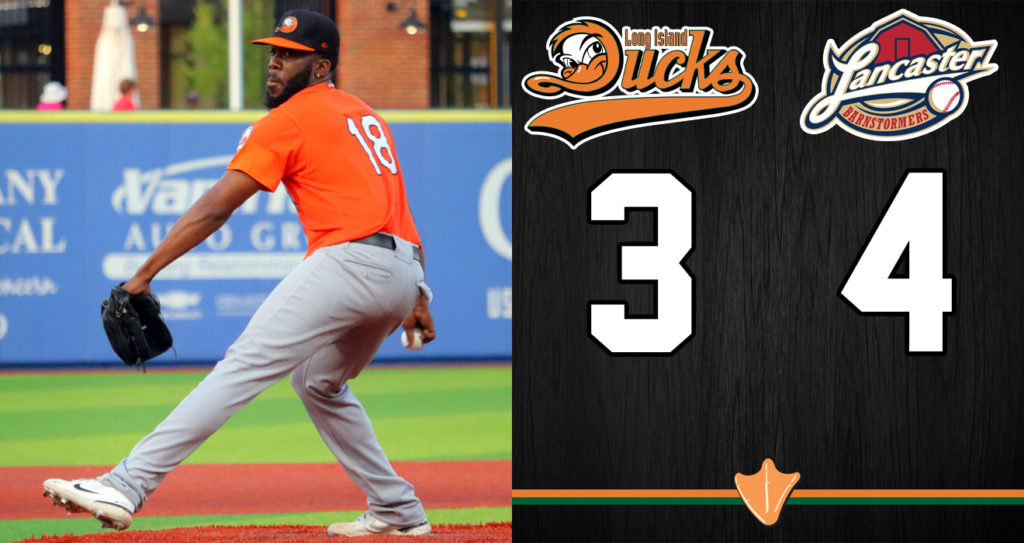 (Lancaster, Pa., Aug. 25, 2022) – The Long Island Ducks were defeated by the Lancaster Barnstormers 4-3 on Thursday night in the final game of a three-game series at Clipper Magazine Stadium.

Carlos Castro gave the Ducks a 1-0 lead with an RBI groundout to second base in the second inning off Barnstormers starter Brooks Hall. The Barnstormers tied the game in the bottom of the inning on a bases loaded walk to Trace Loehr by Ducks starter Akeel Morris. Long Island went back in front 3-1 in the third on Phil Caulfield’s RBI single and a flyout that scored Caulfield.

Neither starter factored into the decision. Morris pitched six innings of three-run ball, allowing eight hits and four walks while striking out five. Hall lasted five innings, giving up three runs on seven hits and one walk while striking out three. West Tunnell (5-0) earned the win after tossing a scoreless ninth inning, working around two walks and a hit batter. Jose Jose (3-1) took the loss, conceding the winning run on two hits in the ninth.

The Ducks return home on Friday night to begin a three-game series against the Charleston Dirty Birds. Game time is slated for 6:35 p.m., with the Fairfield Properties Ballpark gates opening at 5:35 (5:20 for full season ticket holders). It’s Hispanic Heritage Night at the ballpark, presented by Wings of Empowerment. The Ducks will be wearing special jerseys, which will be auctioned off throughout the game. It’s also a Lemonade Stand at Main & Vine Sampling Day and an Angela’s Pizza Friday! Right-hander Joe Iorio (8-4, 4.97) gets the start for the Ducks against Dirty Birds lefty Denson Hull (2-8, 5.15).