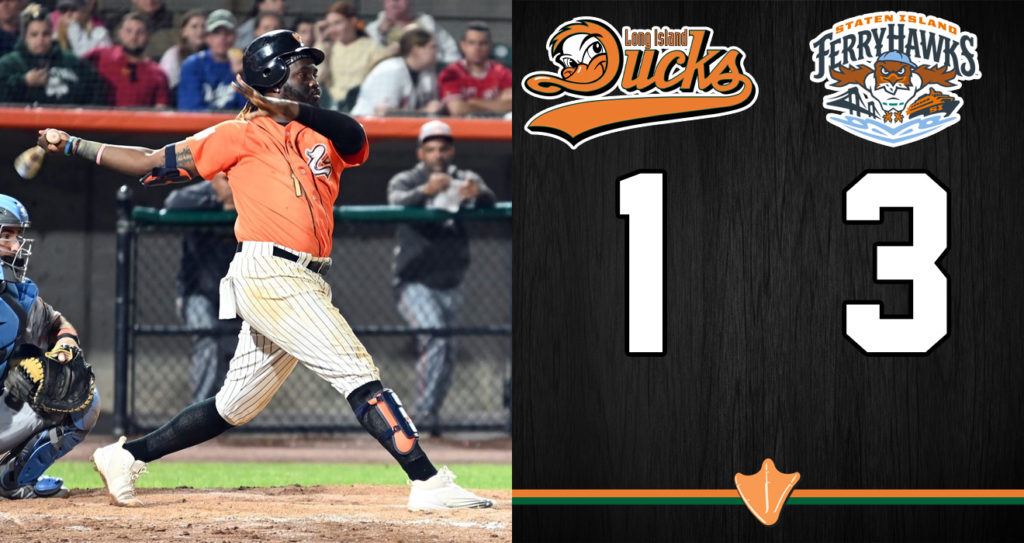 (Central Islip, N.Y., June 4, 2022) – The Long Island Ducks were defeated by the Staten Island FerryHawks 3-1 on Saturday night in the middle game of a three-game series before a past-capacity crowd of 6,362 at Fairfield Properties Ballpark.

Both teams exchanged zeroes until the fourth when John Nester’s RBI double to left field off Ducks starter Stephen Tarpley gave Staten Island a 1-0 lead. A two-run single up the middle by Joseph Monge in the fifth extended the FerryHawks advantage to three.

Long Island rallied in the ninth to try and tie the game. Dustin Woodcock scored on a wild pitch, and the Ducks drew four walks in the inning, but they were unable to even the score.

FerryHawks starter Jordan Simpson did not factor into the decision, lasting two innings and allowing four hits and a walk with one strikeout. Joe Kuzia (1-2) picked up the win with three scoreless innings of relief, yielding a hit and three walks while striking out four. Tarpley (0-3) took the loss, conceding three runs on six hits and a walk over five innings with five strikeouts. Victor Capellan collected his third save of the season after recording the game’s final out.

Vladimir Frias and Deven Marrero each had two hits and walk to lead the Ducks offensively.

The Ducks and FerryHawks wrap up their three-game series on Sunday afternoon. Game time is slated for 1:35 p.m., with the Fairfield Properties Ballpark gates opening at 12:35 (12:20 for full season ticket holders). It’s a Sunday Family Funday, presented by Bethpage Federal Credit Union! Prior to the game, fans will be invited down for a Catch on the Field from 12:40 to 1:00. After the game, fans of all ages are also invited to take part in Kids Run the Bases. Right-hander Scott Harkin (2-3, 5.21) toes the rubber for the Ducks against FerryHawks lefty Anthony Rodriguez (1-1, 6.83).