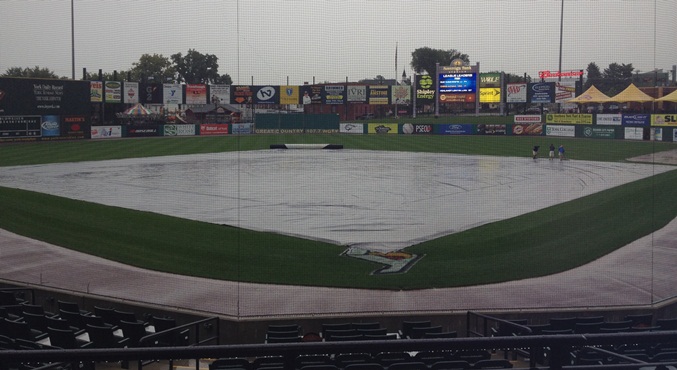 (York, Penn., Aug. 20, 2012)
– Monday’s (August 20) game between the Long Island Ducks and the York Revolution has been postponed due to inclement weather.

Monday’s (8/20) game will be made up as part of a single admission doubleheader on Tuesday, August 21 beginning at 5:30 p.m from Sovereign Bank Stadium. The twinbill will consist of two seven inning games, with game two starting approximately 30 minutes after the completion of the opener.

Fans can follow all the action for both games of the doubleheader live online at LIDucks.com by clicking the Listen Live icon on the homepage. Streaming audio will be provided by iBN, the Internet Broadcast Network.

Long Island returns home on Monday, August 27 to open a three-game series against the Camden Riversharks. First pitch is slated for 7:05 p.m., with the Bethpage Ballpark gates opening at 6:05. It’s an Unused Ticket Day at the ballpark! Fans that could not make it out to a ballgame during the 2012 season and are still in possession of their unused tickets may exchange them for tickets of equal or lesser value at the Bethpage Ballpark Box Office, subject to availability. Tickets for the game and all Ducks home games are available by visiting the Bethpage Ballpark box office, calling 631-940-TIXX or visiting www.liducks.com.