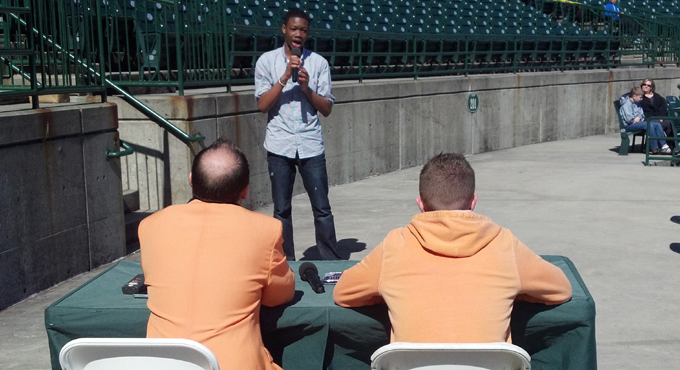 (Central Islip, N.Y., April 6, 2013) – It’s show time! The Long Island Ducks, in conjunction with 106.1-FM WBLI, will hold their annual “Anthem Idol” contest today at Bethpage Ballpark. Registration will begin at 9:00 a.m. with contestants vying for six anthem openings. If you want to sing the Anthem at the ballpark in 2013, this is your opportunity!

The panel of judges will consist of Ducks and WBLI representatives. Following “Anthem Idol,” the Ducks will be hosting tryouts for on-field host and public address announcer positions (start time is approximately 12 noon). Anyone interested in trying out for on-field host or public address announcer positions should send an e-mail expressing their interest to [email protected].

“Year after year, this competition always brings out some of the best singers on Long Island,” says Promotions Manager Jordan Schiff. “We are looking forward to this year’s tryouts and hope to see you display your talents at Bethpage Ballpark on April 6.”

Last year’s auditions were a great success, as many “Anthem Idol” hopefuls lined up to perform for the judges. The lucky winners were each given their moment in the spotlight, performing the national anthem at a Ducks game during the regular season. Performances must be done a capella with a one-minute thirty second time limit and Anthem lyrics must be sung from memory. Instrumentalists and other unique performers are encouraged to participate as well. No tapes will be accepted.