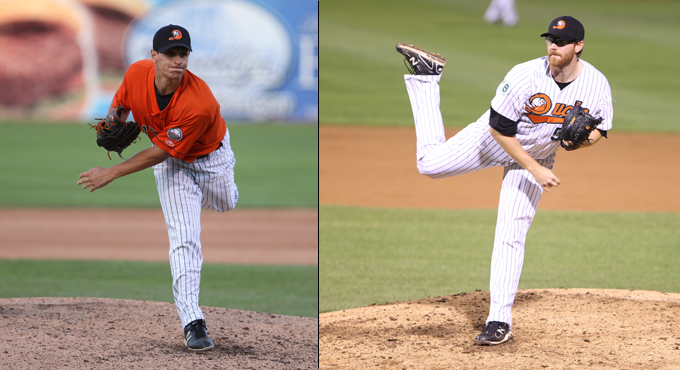 (Central Islip, N.Y., Feb. 8, 2013) – The Atlantic League champion Long Island Ducks today announced that left-handed pitcher Eric Niesen has been signed by the Seattle Mariners organization and received an invitation to spring training. Additionally, the Ducks have signed right-handed pitcher Connor Graham, who will begin his second season with the Flock in 2013.

“Eric did a great job for us last season, and we wish him the best of luck with Seattle,” says Ducks president and general manager Michael Pfaff. “Connor was another important piece of our championship roster, and we’re excited to have him back.”

Niesen pitched in 57 games (two starts) with the Ducks in 2012, posting a 3-2 record with a 3.89 ERA. The southpaw struck out 64 batters while walking just 28 during that span. He also appeared in seven postseason games, striking out three batters in three and two-thirds innings of work.

The 27-year-old has played six seasons of professional baseball, including five years in the New York Mets organization where he reached the Double-A level. In 204 career games (76 starts), the Wake Forest alum has a 4.42 ERA and 418 strikeouts in 502 and two-thirds innings pitched. A native of Michigan, Niesen was originally drafted by the Mets in the third round of the 2007 amateur draft.

Graham appeared in 51 regular season games for Long Island last season, totaling a 2-2 record with a 4.35 ERA and 66 strikeouts in 64 innings of work. During the playoffs, the righty allowed just one run in three innings of work.

The Ohio native has spent time in the Colorado Rockies and Cleveland Indians organizations, reaching as high as Double-A. His best season came in 2008 when he compiled 12 wins, a 2.26 ERA and 138 strikeouts with Single-A Asheville. In 150 minor league games (57 starts), the 27-year-old holds a 26-21 record with a 3.20 ERA and 413 strikeouts. Graham was originally drafted by the Rockies in the fifth round of the 2007 amateur draft.