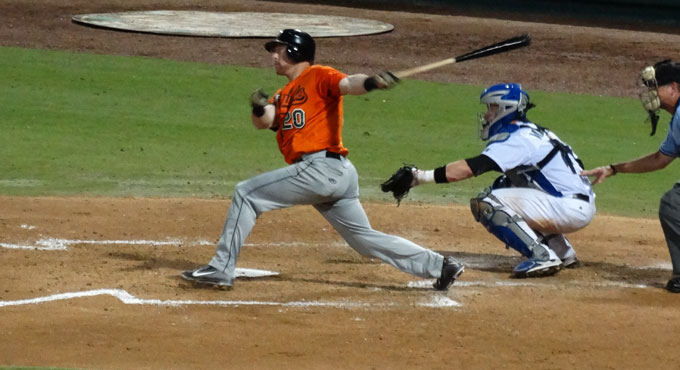 (Sugar Land, Texas, May 14, 2012) – The Long Island Ducks defeated the Sugar Land Skeeters 6-5 on Monday night in the fourth game of a six-game series at Constellation Field.

James McOwen put the Ducks in front early with a two-run homer to right in the first inning off Skeeters starter Duniesky Flores. Ofilio Castro answered with a grand slam to right off Ducks starter Gustavo Chacin, the first grand slam in Constellation Field history, in the bottom of the first.

After a lengthy rain delay, both teams exchanged zeroes until the fifth, when a RBI single to right by Jimmy Van Ostrand extended the lead to 5-2. However, the Ducks rallied for two runs in the sixth on a pair of RBI singles from Wilberto Ortiz and Kraig Binick and two more in the ninth to take a 6-5 lead. Shawn Williams’ RBI single and a passed ball put the Ducks ahead.

Jason Monti (2-0) got the win in relief, tossing two innings, allowing two hits while striking out three. Ryan Houston (0-1) suffered a blown save and a loss, surrendering two runs on two hits and three walks in one inning of work. Jeremy Hill earned his first save with a perfect ninth.

Reid Gorecki’s three hits led the Ducks, while Binick, McOwen and Williams each had two.

Long Island and Sugar Land continue their six-game set on Tuesday morning. Game time is slated for 12:05 p.m. EDT at Constellation Field. Fans can follow all the action live online at www.liducks.com by clicking the Listen Live icon on the homepage. Streaming audio will be provided by iBN, the Internet Broadcast Network. Bob Zimmermann gets the start for Long Island against Sugar Land’s Derrick Gordon.

The Ducks return home on Friday, May 18 to begin a 10-game homestand, as they host the Somerset Patriots for a three-game series. First pitch is set for 7:05 p.m., with the Bethpage Ballpark gates opening at 6:05. It’s “Don’t Zone Out Night” at the ballpark, and the first 2,500 fans will receive a Ducks Static Cling Decal, courtesy of CSEA. Tickets for the game and all Ducks home games are available by visiting the Bethpage Ballpark box office, calling 631-940-TIXX or visiting www.liducks.com.