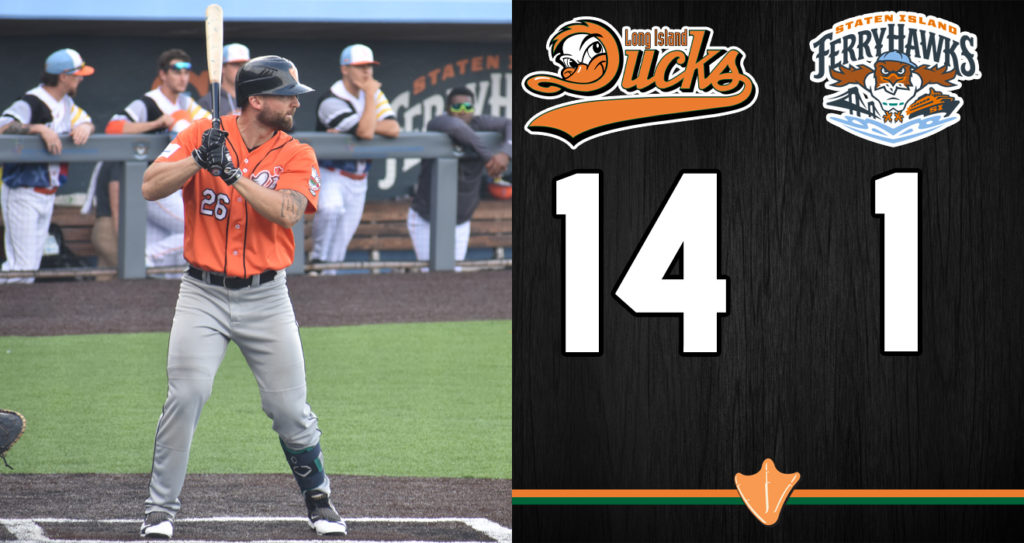 The Ducks took a 3-0 advantage versus FerryHawks starting pitcher Francisco Carrillo just five batters into the ballgame when Deibinson Romero launched a three-run home run to left field for his team-leading 11th big fly of the campaign. Long Island made it 6-0 in their favor in the fifth thanks to run-scoring doubles produced by Sam Travis and Jacson McGowan and a sacrifice fly off the bat of Vladimir Frias. The Flock added an insurance run in the seventh for a 7-1 cushion and broke the game wide open in the ninth as the visitors sent 13 batters to the plate and scored seven more times, highlighted by a two-run homer to the opposite-field in right by Carlos Castro, RBI base knocks from Phil Caulfield, L.J. Mazzili, and Travis, an RBI hit-by-pitch to Alejandro De Aza, and a bases loaded run-scoring walk issued to Romero as the Flock matched a season-high by pounding out a total of 21 hits in the ballgame.

The run-support was more than enough for Ducks starting pitcher Scott Harkin (8-6), who earned the win after tossing five innings of one-run baseball on four hits allowed, walking two and striking out four. Carrillo (0-4) was tagged with the loss, surrendering six runs on 11 hits (one home run) in just four and one-third innings of work, walking one while striking out three. Travis led the offensive attack with his second four-hit performance of the season, while also scoring a pair of runs and driving in two as every batter in the Long Island lineup reached base at least twice in the contest.

The Ducks and FerryHawks continue their three-game set on Wednesday morning. First pitch is scheduled for 11:00 a.m. at Staten Island University Hospital Community Park. Fans can follow all the action on the Long Island Ducks Broadcast Network. Live streaming HD video and audio will be available via BoxCast on LIDucks.com as well as on the Ducks official Facebook page and YouTube channel. Right-hander Joe Iorio (6-4, 4.84) gets the nod for the Ducks against FerryHawks righty Dakota Freese (1-7, 4.09).