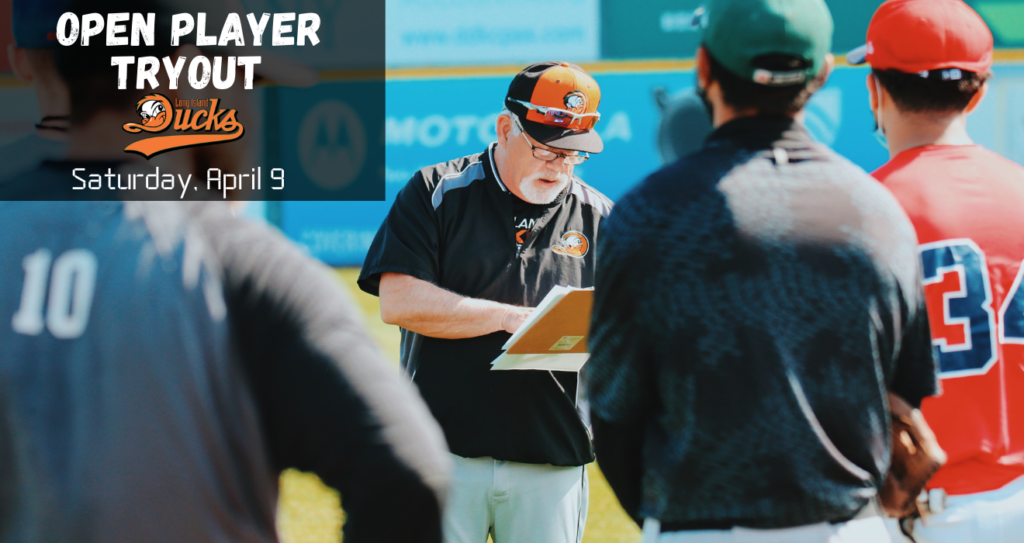 (Central Islip, N.Y., March 8, 2022)
– The Long Island Ducks today announced the team will host an open player tryout at Fairfield Properties Ballpark on Saturday, April 9. Ballplayers wishing to play for the Ducks will have the opportunity to showcase their skills in front of Ducks coaches and team representatives.

Eight players have earned contracts with the Ducks via the team’s open player tryout. Among them are pitchers Jason Creasy, Tyler Honahan, Chris Pike, Anthony Rosati and Brandon Sherman, catchers Wagner Gomez and Francis Prettitore and outfielder Robert Garcia. Creasy’s contract was later purchased by the Arizona Diamondbacks organization in 2018, and he reached the Triple-A level with the Atlanta Braves in 2019. Sherman and Rosati both signed with the Ducks during the 2021 season. Additionally, Anthony Sirianni served as the Ducks bullpen catcher for the 2021 season.

Members of the Ducks coaching staff and team representatives will be evaluating players at the ballpark. Manager Wally Backman, Pitching Coach Rick Tomlin, Hitting Coach Lew Ford and President/GM Michael Pfaff are scheduled to be in attendance. Select participants (chosen by the coaching staff) will earn the opportunity to play in a live, on-field scrimmage following the tryout.

Position players must report to Fairfield Properties Ballpark no later than 8:30 a.m. for registration, while pitchers must report at 10:00 a.m. Participants must be 18 years of age or older, wear proper baseball attire and supply their own wooden bats and baseball gloves. Participants will also be required to sign a waiver before trying out.Cleats/spikes are only to be worn while on the field. All players must wear sneakers/turf shoes prior to reaching the field.

The Pro-Tryout Specifications are scheduled to include:

There will be an administration fee of $100 to participate in this year’s tryout ($125 on the day of the event). To register and reserve your tryout spot, please CLICK HERE to submit a registration form. You may also contact Christian Petrucci during normal business hours by calling (631) 940-3825 or emailing [email protected].