PACK THE POND FOR “FLOCK-TOBER” 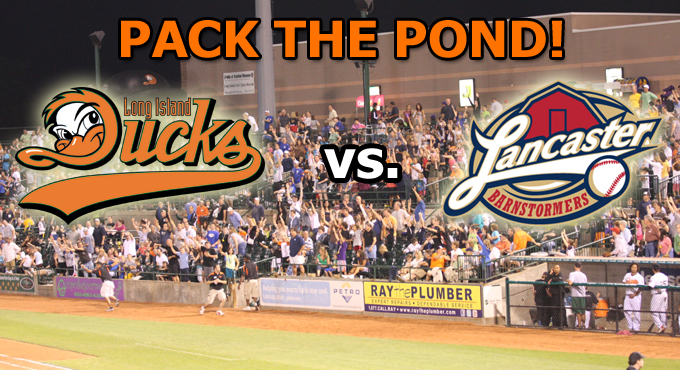 Support the Flock as they battle for the Atlantic League championship

(Central Islip, N.Y., Oct. 1, 2012) – The Liberty Division champion Long Island Ducks will host the Atlantic League Championship Series against the Freedom Division champion Lancaster Barnstormers this weekend and need you at the park! To make sure you don’t miss a second of all the excitement, the Ducks are offering more promotions and ticket options than ever before.

After opening the series with Games One and Two in Lancaster, the Flock will host Game Three of the series on Friday night at 7:05 p.m. The Bethpage Ballpark gates will open at 6:05 for Friday’s contest, and the first 1,500 fans through the gates will receive Championship Series Rally Towels, courtesy of News 12. Following the game, all fans in attendance will be treated to a world famous Grucci Fireworks Extravaganza. Game Four will take place on Saturday night at 7:05 with a Grucci Fireworks Extravaganza to light the sky following the game, and Game Five will follow on Sunday evening at 5:05.

In addition, the Ducks are offering fans the unprecedented opportunity to purchase a 2012 “Flock-tober” package to enjoy the Atlantic League Championship Series at Bethpage Ballpark. Each package includes a box seat ticket to all three home games of the series against Lancaster along with a Ducks Black Adjustable Hat and a famous Quacker so you can make the Duck Pond loud all game long! Best of all, each package is just $40, a discount of 35{d19d1e12342262c479f9972a08c42c67c928132b64b850956d7c8317104b5166} off the normal box office and store price, and can be purchased at the box office only.

Season ticket holders wishing to purchase the Hat/Quacker combo can do so for just $15 (a 40{d19d1e12342262c479f9972a08c42c67c928132b64b850956d7c8317104b5166} discount!) by showing their season ticket holder ID card at the Waddle In Shop during the Championship Series only. All “Flock-tober” ticket packages are non-refundable, and tickets to any games that do not get played may be exchanged for a ticket of equal or lesser value to any 2013 regular season home game, subject to availability.

All three home games of the Atlantic League Championship Series will also be Unused Ticket Days at Bethpage Ballpark. Fans who could not make it out to a ballgame this season and are still in possession of their unused tickets may exchange them for ones of equal or lesser value to Friday, Saturday or Sunday’s game at the Bethpage Ballpark Box Office, subject to availability. The exchanging of tickets must be done at the Bethpage Ballpark Box Office and cannot be done over the phone or online. A one dollar fee per ticket will be applied to account for the Suffolk County surcharge on all tickets. For more information, please contact the ticket office at (631) 940-TIXX.