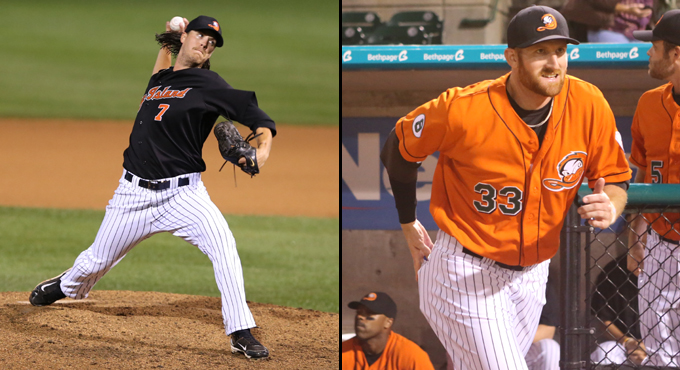 (Central Islip, N.Y., Mar. 4, 2013) – The Atlantic League champion Long Island Ducks today announced the signings of right-handed pitchers John Brownell and Nick DeBarr. Both begin their second season with the Ducks and in the Atlantic League.

“John and Nick were important pieces of our pitching staff during the stretch run in 2012,” says Ducks president and general manager Michael Pfaff. “We are excited to have them both back on our staff this season.”

Brownell was acquired by the Ducks from the Grand Prairie Air Hogs of the American Association on September 5, 2012 and pitched in four games (three starts) during the regular season. He posted a 2-2 record while striking out 15 batters in 16 and one-third innings pitched. The South Dakota native shined in the playoffs, posting a 2.84 ERA in two starts and earning the victory in Game Four of the Atlantic League Championship Series against Lancaster.

DeBarr joined the Flock on September 17, 2012 after beginning the season as Brownell’s teammate in Grand Prairie. He allowed just one unearned run out of the bullpen in two regular season games for the Ducks before pitching in a pair of postseason games. As a starter with the Air Hogs, he compiled a 12-7 record with a 4.34 ERA and four complete games.