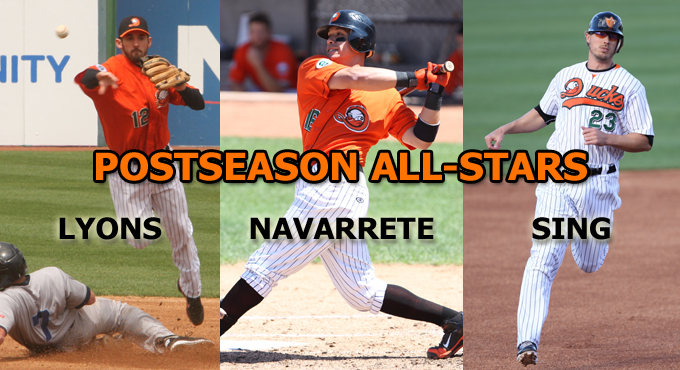 Navarrete, who was selected as the first-team utility man, led the Ducks with a .309 batting average, good for fifth in the Atlantic League, and 90 runs batted in which ranked third in the league. The seven-year Duck set an Atlantic League record with 50 doubles this season, shattering the previous mark of 42 which he set in 2007. In addition, he compiled a franchise record 68 extra-base hits, surpassing his total of 66 in 2009 and coming just one shy of the league record of 69. The Port Washington resident was selected as the starting second baseman for the Liberty Division during the All-Star Game in Camden, New Jersey and clubbed a two-run homer in the first inning.

Lyons, chosen as the first-team shortstop, led the Flock and ranked second in the league with six triples during the 2012 campaign. He was tied for fourth on the Ducks with 60 runs and finished second in the league with a .875 stolen base percentage, swiping 14 bases in 16 attempts. The second-year Duck’s brightest achievement came when he was named the Atlantic League Championship Series Most Valuable Player. His game-winning three-run double in the ninth inning of Game Two and his Championship-winning bunt single in the ninth inning of Game Five helped secure the team’s second ever Atlantic League title. Lyons was also selected to the Liberty Division All-Star squad this summer, serving as the starting shortstop.

Sing, voted as the second-team first baseman, led the Ducks with 26 home runs during the 2012 season, good for third in the Atlantic League, along with 78 runs scored. He posted a .284 batting average while finishing second on the Flock in doubles (31) and third in RBI (78). During the postseason, he batted .333, drove in a team-high eight runs and set a franchise record with three home runs during the team’s Liberty Division Championship Series win over the Southern Maryland Blue Crabs. In the last five seasons, Sing has more homers (122) and RBI (401) than any other player in independent baseball.

The complete list of 2012 Atlantic League postseason honors can be viewed by CLICKING HERE.