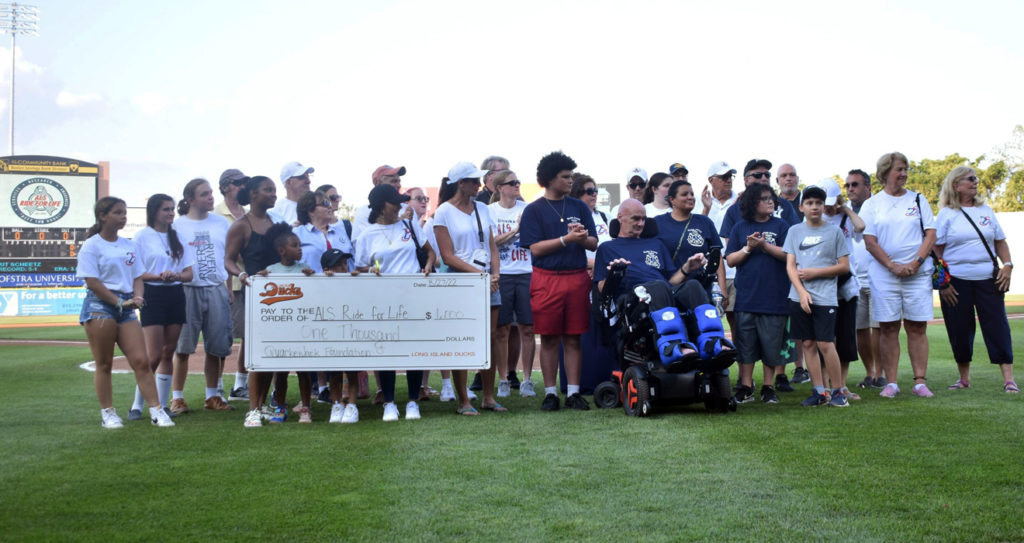 (Central Islip, N.Y., Aug. 27, 2022) – The QuackerJack Foundation, the charitable arm of the Long Island Ducks, made a donation to ALS Ride for Life prior to the team’s game against the Charleston Dirty Birds on Saturday.

Representatives in attendance for the check presentation included ALS Ride for Life President and Chairman Ray Manzoni, and Executive Director Marilyn Sloan, along with board members Christine Pendergast, Dick Iannuzzi, Jeremy Cohn and Paul Weisman, who is also an ALS Patient. Joining Paul is ALS patient Rob Olson, as well as major corporate sponsors and supporters. Throwing out the first pitch for ALS Ride For Life was Rob’s son, Owen Olson.

The ALS Ride for Life Organization has raised over 10 million dollars for research to find treatments for a cure while providing ongoing patient services. This year, the Ducks and organization are celebrating the 25th ALS Ride for Life Journey, a remarkable patient’s tribute to Gehrig’s legacy of courage and determination. In May, ALS patients completed a ride in their motorized wheelchairs along with supporters, from Riverhead on Eastern Long Island to Manhattan.

Eighty-three years ago, Yankee Legend, Lou Gehrig stood at home plate and gave his farewell speech. Less than two years later, he died from Amyotrophic Lateral Sclerosis, a fatal disease which now carries his name. To this day, ALS remains fatal, with 30,000 Americans battling it each day and 6,000 dying yearly.