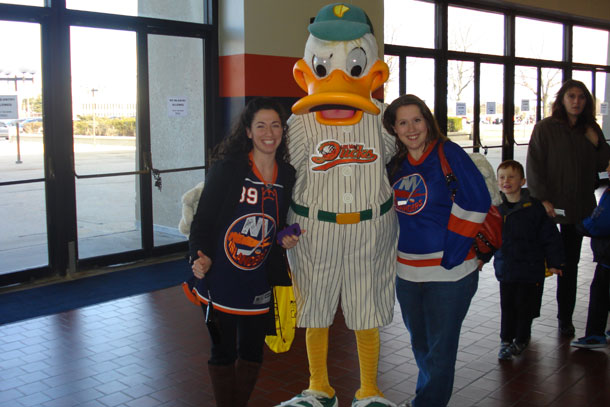 QuackerJack took the ice prior to the game to work on his skating skills and was then introduced to the crowd of 15,818, which responded with a standing ovation. Following introductions, “Long Island’s Best Mascot” took to the concourse where he signed autographs for fans and posed for pictures.

After spending some time on the concourse, QuackerJack joined fans in the seating bowl and helped assist the Ice Girls with between-period promotions. Finally, QJ showed off some of his dance moves on the JumboTron as ‘YMCA’ played throughout the arena. All of the fans at Nassau Coliseum had a blast on Mascot Day with the mascot voted the “Best of Long Island.”

The Long Island Ducks are entering their 13th season of play in the Atlantic League of Professional Baseball and play their home games at Bethpage Ballpark. Opening Day is May 4. For further information, call (631) 940-DUCK or visit www.liducks.com.