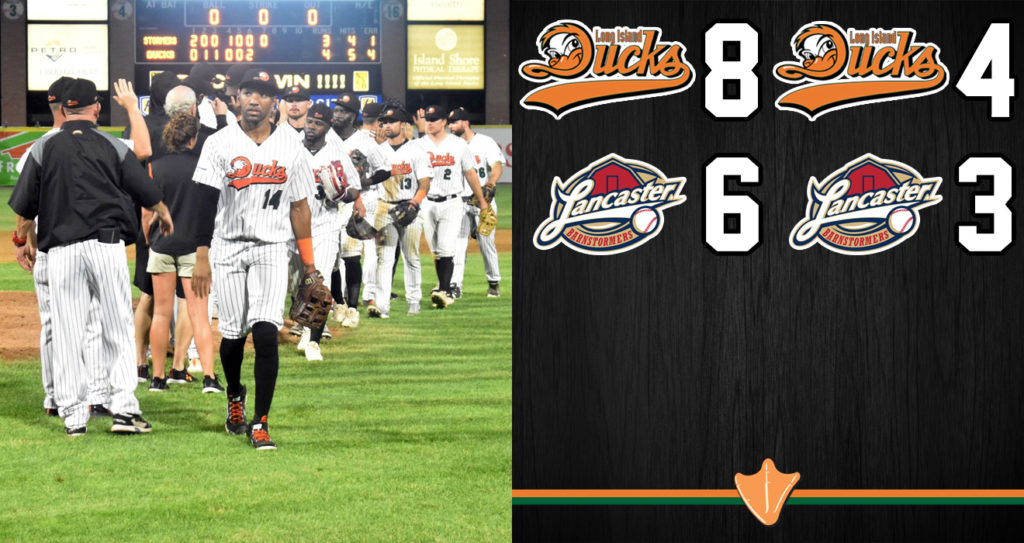 (Central Islip, N.Y., June 25, 2022) – The Long Island Ducks swept a single admission doubleheader from the Lancaster Barnstormers on Saturday night at Fairfield Properties Ballpark, rallying for an 8-6 win in game one and a 4-3 win in game two.

The Ducks took a 1-0 lead in the second inning of game one on an RBI ground-rule double by Dustin Woodcock off Barnstormers starter Oscar De La Cruz. Kelly Dugan answered in the third with a two-out, two-run homer to right-center off Ducks starter Akeel Morris to put the Barnstormers ahead 2-1.

A three-run third inning by Lancaster, highlighted by solo homers from LeDarious Clark and Anderson Feliz and an RBI triple by Shawon Dunston Jr., gave the visitors a 5-1 lead. However, a two-run homer to right by Woodcock followed immediately by a solo homer down the left field line from Austin Rei in the bottom of the frame brought Long Island back within a run at 5-4. Dugan’s second homer of the game pushed the Barnstormers advantage to 6-4 in the fifth.

Long Island stormed back with four runs in the sixth to take an 8-6 lead. RBI singles by L.J. Mazzilli and Vladimir Frias, a wild pitch that scored Woodcock and a sac fly to center off the bat of Sam Travis did the damage.

Morris did not factor into the decision but lasted three and two-thirds innings, allowing five runs on five hits and three walks with three strikeouts. Chad Hockin (1-1) picked up the win with a 1-2-3 sixth inning. De La Cruz (2-1) took the loss, giving up seven runs (six earned) on eight hits and three walks over five innings with three strikeouts. Tyler Webb earned his sixth save with a 1-2-3 seventh inning, striking out two.

Lancaster took a 2-0 lead in the first inning of game two on Andretty Cordero’s RBI single off Ducks starter Cody Beckman and an error that plated Dugan. Travis closed the gap to 2-1 in the second with a leadoff solo homer to left-center off Barnstormers starter Erik Manoah. An RBI infield single to short by Frias in the third tied the game at two.

The Barnstormers went back in front 3-2 in the fourth on a throwing error that scored Trace Loehr. It stayed that way until the bottom of the sixth when the Ducks rallied to take a 4-3 lead on a fielder’s choice that scored Alejandro De Aza and an RBI single by Joe DeCarlo.

Neither starter factored into the decision. Beckman lasted five innings, allowing three runs (one earned) on four hits and five walks while striking out six. Manoah pitched five innings as well, giving up two runs on three hits and two walks with seven strikeouts. Sandy Baez (3-1) got the win after pitching around three walks to toss a scoreless sixth inning. Chase Johnson (1-6) suffered the loss, surrendering two runs (one earned) on two hits and a walk in one inning. Nick Goody collected his third save with a scoreless seventh inning.

The Ducks and Barnstormers wrap up their four-game series on Sunday afternoon. Game time is slated for 1:35 p.m., with the ballpark gates opening at 12:35 (12:20 for full season ticket holders). The first 1,500 fans in attendance will receive Ducks Thunderstix, courtesy of News 12 Long Island. It’s also a Sunday Family Funday, presented by Bethpage Federal Credit Union! Prior to the game, fans will be invited down for a Catch on the Field from 12:40 to 1:00. After the game, fans of all ages are also invited to take part in Kids Run the Bases. Right-hander Joe Iorio (6-1, 3.81) gets the ball for the Ducks against Barnstormers lefty Augie Sylk (2-6, 6.24).