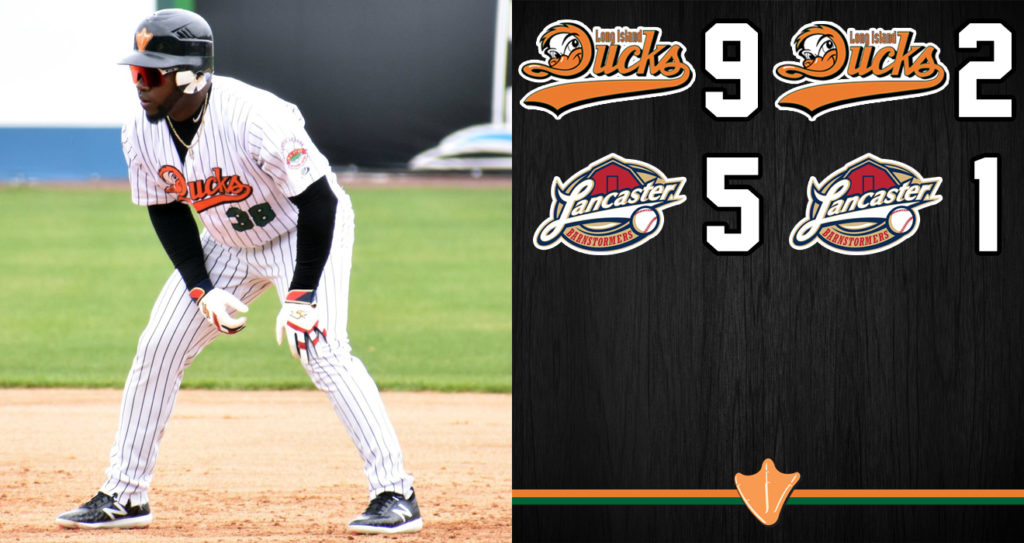 (Central Islip, N.Y., May 8, 2022) – The Long Island Ducks swept the Lancaster Barnstormers in a single admission doubleheader on Sunday afternoon at Fairfield Properties Ballpark, rallying for a 9-5 win in game one before scoring late to take game two 2-1.

Lancaster grabbed a 1-0 lead in the first inning of game one on Colton Shaver’s RBI single up the middle. The Barnstormers extended their lead to 3-0 on a wild pitch by Ducks starter Brett Kennedy that plated Melvin Mercedes and an RBI single from Kelly Dugan. An RBI double by Dugan and an RBI infield single by Andretty Cordero in the fifth made it a 5-0 game.

The Ducks closed to within 5-3 in the bottom of the fifth against Barnstormers starter. Deibinson Romero’s sacrifice fly to left and Sam Travis’ two-run single up the middle closed the gap to two. Long Island then erupted for six runs in the sixth to take a 9-5 lead. Vladimir Frias’ two-run single tied the game at five and was the 1,000th hit of his professional career. Travis, Joe DeCarlo and Deven Marrero all drew bases loaded walks, and L.J. Mazzilli scored on a dropped third strike.

Johnni Turbo and Rusney Castillo each had two hits to lead the Flock, with Castillo adding two runs and two walks. Travis drove in three runs, while Frias had two RBIs, a run and two walks.

Michael Wielansky put the Ducks in front 1-0 in the second inning of game two with an RBI fielder’s choice that scored Travis. Anthony Peroni scored on a passed ball in the third to tie the game at one. It stayed that way until the bottom of the sixth when Romero smacked a two-out RBI double down the left field line to give the Ducks a 2-1 lead.

Ducks starter Akeel Morris did not factor into the decision but pitched five innings, allowing one unearned run on three hits and four walks while striking out four. Joe Iorio (2-0) picked up the win with a scoreless sixth inning. Barnstormers starter Cameron Gann (1-1) took the loss, conceding two runs on six hits and two walks over five and two-thirds innings with four strikeouts. Sandy Baez collected his second save with a perfect seventh inning.

The Ducks hit the road on Tuesday night to open a three-game series against the Barnstormers in Pennsylvania. First pitch is scheduled for 6:30 p.m. at Clipper Magazine Stadium. Fans can follow all the action on the Long Island Ducks Broadcast Network. Live streaming HD video and audio will be available via BoxCast on LIDucks.com as well as on the Ducks official Facebook page and YouTube channel. Right-hander Scott Harkin (1-1, 6.43) gets the start for the Ducks against Barnstormers righty Dominic DiSabatino (0-2, 5.54).

Long Island returns home on Friday, May 13, to begin a three-game set with the High Point Rockers. Game time is slated for 6:35 p.m., with the Fairfield Properties Ballpark gates opening at 5:35 (5:20 for full season ticket holders). It’s an Angela’s Pizza Friday! If the K-Man on the Rockers strikes out during the game, fans will be able to redeem their game ticket for a special offer at Angela’s Pizzeria in Islip during the rest of the weekend. Tickets for the game, and all Ducks games, are available by visiting the Fairfield Properties Ballpark box office, calling (631) 940-TIXX or CLICKING HERE.