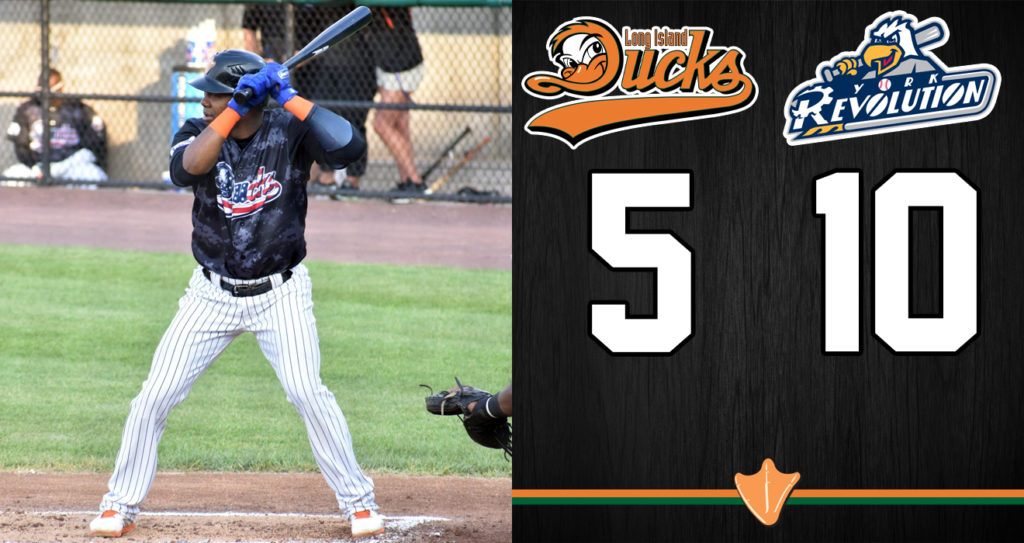 (Central Islip, N.Y., July 1, 2022) – The Long Island Ducks were defeated by the York Revolution 10-5 on Friday night in the opener of a three-game series before a past-capacity crowd of 6,335 at Fairfield Properties Ballpark.

The Revolution jumped out to a 3-0 lead in the first inning on RBI singles by Josue Herrera and JC Encarnacion and an RBI ground rule double by Yefri Perez off Ducks starter Anderson DeLeon. The Ducks answered with a three-spot of their own in the bottom of the first on Alejandro De Aza’s RBI single to center and sacrifice flies to right by Deibinson Romero and Rusney Castillo off Revolution starter Jorge Martinez.

York plated went back in front 6-3 in the second on Connor Lien’s RBI double and a two-run single by Encarnacion. A solo home run to right field by Carlos Franco in the fourth and a two-run homer to center by Franco in the sixth extended the lead to 9-3. Johnni Turbo’s pinch-hit solo homer to left in the sixth and De Aza’s RBI single to right in the seventh closed the gap to four. However, Perez’s solo homer to center in the ninth pushed York’s lead up to 10-5.

De Aza led the Flock at the plate with three hits, two RBIs and a run scored. Turbo added two hits, an RBI and a run off the bench.

The Ducks and Revolution continue their three-game set on Saturday night. Game time is slated for 6:35 p.m., with the Fairfield Properties Ballpark gates opening at 5:35 (5:20 for full season ticket holders). Following the game, all fans in attendance will be treated to a Fireworks Spectacular, presented by Fairfield Properties. The Ducks will also be celebrating the 10th Anniversary of their 2012 Atlantic League Championship. The first 1,000 fans in attendance will receive a Championship Poster. Prior to the game, former Ducks shortstop Dan Lyons, the 2012 Atlantic League Championship Series Most Valuable Player, will throw out a ceremonial first pitch to former Ducks outfielder Kraig Binick, who was also part of the 2012 championship team. Right-hander Joe Iorio (6-1, 3.72) takes the mound against Revolution righty Alex Sanabia (3-1, 4.08).