ROCKERS EVEN UP SERIES WITH DUCKS 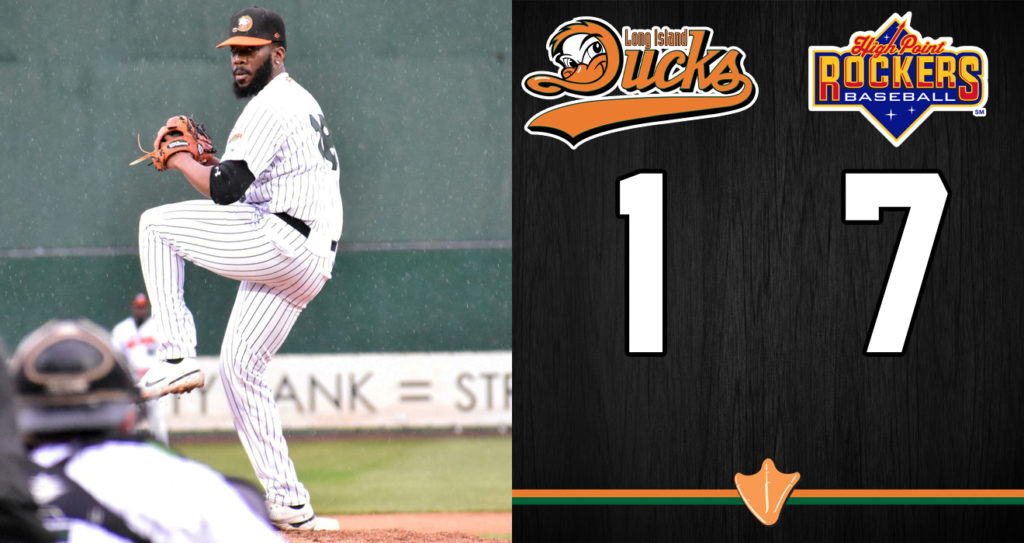 (Central Islip, N.Y., May 14, 2022) – The Long Island Ducks were defeated by the High Point Rockers 7-1 on Saturday night, the middle game of a three-game series at Fairfield Properties Ballpark.

The Ducks took a 1-0 lead in the second inning when Deibinson Romero doubled and later scored on a wild pitch by Rockers starter Jheyson Manzueta. Jerry Downs answered in the fourth with a three-run home run to right field off Ducks starter Akeel Morris, putting the Rockers in front 3-1.

The Rockers added two more runs in the sixth when Quincy Latimore and Ben Aklinski came around to score on a fielding error. Another pair of runs crossed home plate in the eighth on Mike Gulino’s sacrifice fly to right and a passed ball that scored Downs.

The Ducks and Rockers wrap up their three-game set on Sunday afternoon. Game time is slated for 1:35 p.m., with the Fairfield Properties Ballpark gates opening at 12:35 (12:20 for full season ticket holders). The first 1,000 fans in attendance will receive Ducks Rubber Bracelets, courtesy of The ELIJA Foundation. It’s also a Sunday Family Funday, presented by Bethpage Federal Credit Union. Prior to the game, fans will be invited down for a Catch on the Field from 12:40 to 1:00. After the game, fans are also invited to take part in Kids Run the Bases. Right-hander Scott Harkin (1-2, 7.58) toes the rubber for the Ducks against Rockers righty Andrew Church (2-0, 4.22).