ROCKERS SHUT DOWN DUCKS OFFENSE TO EVEN SERIES 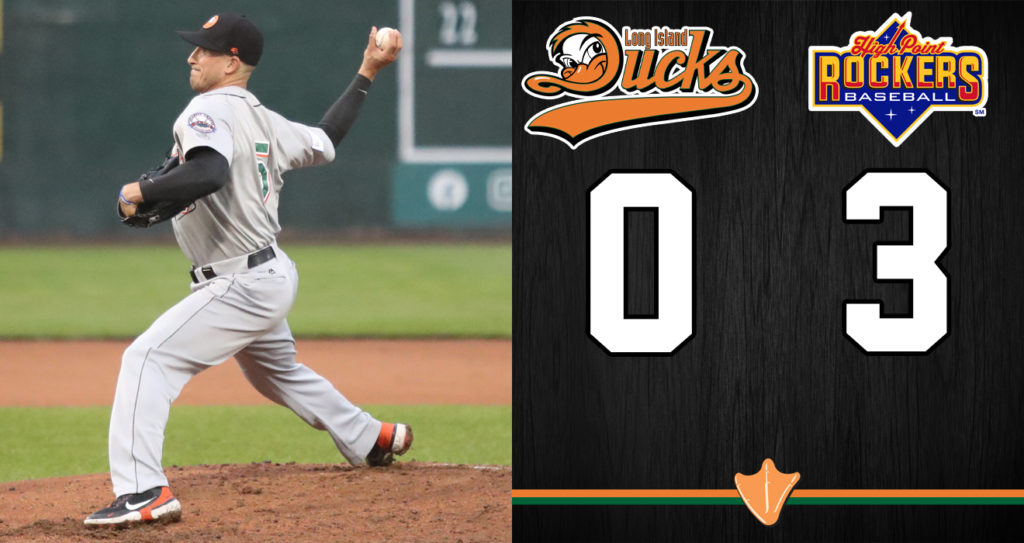 (High Point, N.C., June 15, 2022) – The Long Island Ducks were defeated by the High Point Rockers 3-0 on Wednesday night in the middle game of a three-game series at Truist Point.

High Point struck first in the opening inning on a two-out, two-run double down the left field line by Logan Morrison off Ducks starter Joe Iorio. A sacrifice fly to left off the bat of Johnny Field in the fourth increased the Rockers lead to 3-0.

Rockers starter Jonah Scolaro (1-0) earned the win in his pro debut, tossing five scoreless innings, allowing two hits and three walks while striking out four. Iorio (5-1) took the loss despite pitching seven innings of three-run ball, yielding six hits and two walks while striking out six and throwing 119 pitches. Chasen Bradford picked up his seventh save of the season with a scoreless ninth inning, working around a hit and a walk.

Deibinson Romero led the Ducks offense with two hits and a walk.

The Ducks and Rockers wrap up their three-game series on Thursday night. First pitch is scheduled for 6:35 p.m. at Truist Point. Fans can follow all the action on the Long Island Ducks Broadcast Network. Live streaming HD video and audio will be available via BoxCast on LIDucks.com as well as on the Ducks official Facebook page and YouTube channel. Left-hander Stephen Tarpley (0-3, 5.01) toes the rubber for the Ducks against Rockers righty Craig Stem (0-1, 5.84).