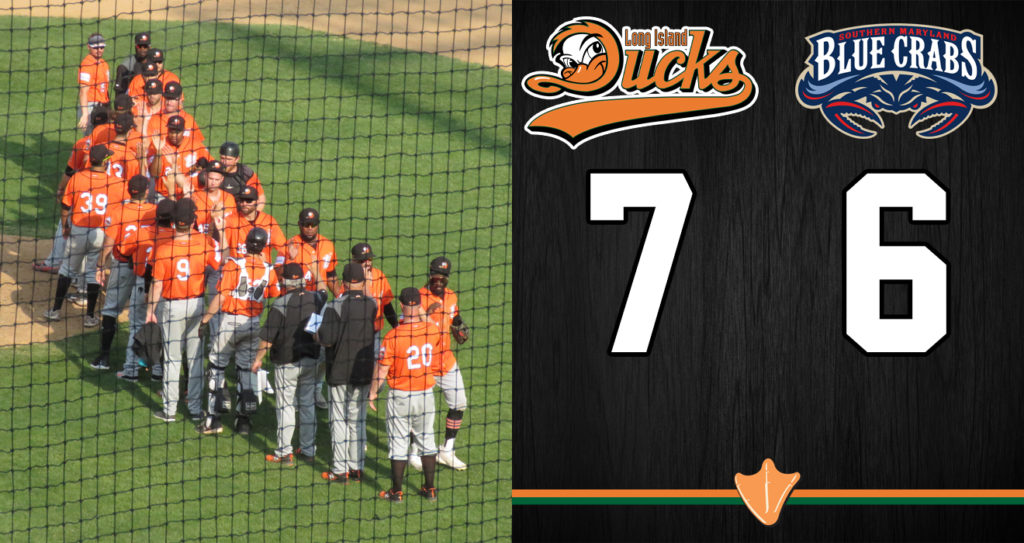 (Waldorf, Md., May 22, 2022) – The Long Island Ducks defeated the Southern Maryland Blue Crabs 7-6 in 10 innings on Sunday afternoon in the final game of a three-game series at Regency Furniture Stadium.

The Ducks jumped out to a 2-0 lead in the second inning on Deibinson Romero’s solo home run to left field and Vladimir Frias’ RBI double down the left field line off Blue Crabs starter Mitch Lambson. A bloop single to right by Romero in the third plated Lew Ford, who doubled, to make it a 3-0 game.

It stayed that way until the bottom of the ninth when a two-out, pinch-hit, three-run homer by Raul Shah tied the game at five. Long Island took the lead back in the 10th on L.J. Mazzilli’s RBI double to right-center and Alejandro De Aza’s sac fly to right. Alex Crosby’s sac fly to right in the bottom of the 10th closed the gap to 7-6, but the Blue Crabs were stopped there.

Neither starter factored into the decision. DeLeon lasted five innings, allowing two runs on three hits and three walks with two strikeouts. Lambson pitched six and one-third innings, yielding five runs on 11 hits while striking out six. Sandy Baez (1-0) picked up the win despite allowing two unearned runs in the ninth. Dalton Geekie (0-1) took the loss, conceding two runs (one earned) on two hits and a walk in two-thirds of an inning. Chad Hockin collected his first save after recording the game’s final three outs.

The Ducks return home on Tuesday to begin another three-game set with Southern Maryland. Game time is slated for 6:35 p.m., with the Fairfield Properties Ballpark gates opening at 5:35 (5:20 for full season ticket holders). It’s a Triple Play Tuesday at the ballpark! If the Ducks turn a triple play during the game, one lucky fan will win $25,000. Simply sign up prior to first pitch at the Ticket Kiosk on the main concourse to be eligible. Right-hander Brett Kennedy (2-1, 3.03) gets the start for the Ducks against Blue Crabs righty Eddie Butler (2-0, 4.62).