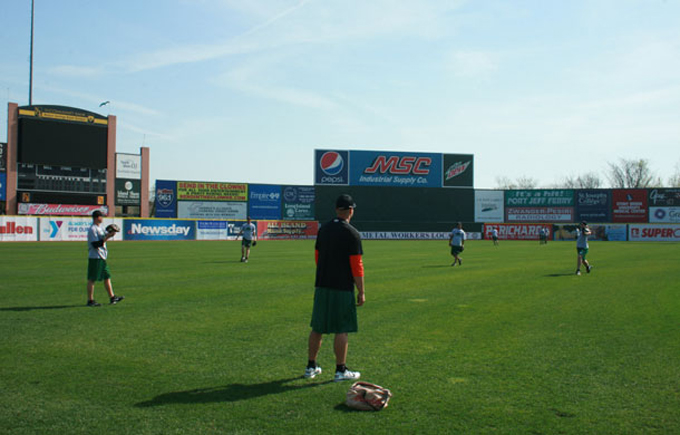 
(Central Islip, N.Y., April 16, 2012)
– The Long Island Ducks today announced the final additions to their roster as spring training kicks off for the third consecutive season at Bethpage Ballpark. The team has signed pitchers Randy Keisler and Eric Niesen along with catcher Mike Rivera and announced catcher Mitch Canham has been signed by the St. Louis Cardinals and assigned to Memphis (AAA).

“We are excited to begin our quest for the Atlantic League championship,” said Ducks manager Kevin Baez. “I look forward to seeing the team together on the field.”

Keisler begins his second season with the Ducks and 14th in professional baseball. The southpaw spent part of 2010 on Long Island, going 5-0 with a 3.65 ERA in eight games (all starts). A native of Texas, he spent six seasons in the Major Leagues with the Yankees, Padres, Reds, Athletics and Cardinals, posting a 4-4 record and 100 strikeouts in 150 and two-thirds innings. The 36-year-old Louisiana State alum was originally drafted by the Yankees in the second round of the 1998 amateur draft.

Niesen starts his sixth season of professional baseball and first with the Ducks. He has spent the past five years in the New York Mets organization, reaching as high as Double-A. In 146 games (73 starts), the Wake Forest alum has a 4.54 ERA and 351 strikeouts in 430 innings pitched. The 26-year-old Michigan native was originally drafted by the Mets in the third round of the 2007 amateur draft.

Rivera enters his 16th season of professional baseball and first with Long Island. He has played parts of nine seasons at the Major League level with four different teams (Tigers, Padres, Brewers and Marlins). In 189 big league games, the Puerto Rico native has 13 home runs, 69 RBI and 32 doubles. The 35-year-old is a veteran of over 1,000 minor league games and is a career .262 hitter with 177 home runs, 691 RBI and 1,001 hits. Rivera was originally signed as an undrafted free agent by the Tigers in 1997.

The spring training schedule will include two exhibition games against the cross-sound rival Bridgeport Bluefish, one game against a Long Island semi-pro team, the Long Island Black Sox, and one against the New York Police Department. Three games are slated to be played at the Duck Pond (complete schedule below). General admission tickets will be issued FREE to Ducks season ticket and suite holders, and a $5 donation to the QuackerJack Foundation will apply to all other fans. Season ticket holders may gain admission to the ballpark by showing their season ticket holder ID card or other form of identification at the box office.

The Ducks will conclude spring training with their annual season ticket holder meet-and-greet barbeque on Wednesday, April 25, allowing fans to connect with the 2012 team on a one-on-one level. To find out more information about season ticket packages, call the Ducks ticket office at (631) 940-DUCK or CLICK HERE.

The complete spring training schedule is as follows:

Individual game tickets for the 2012 season are on sale now. The home opener takes place on Friday, May 4 as the Ducks take on the Camden Riversharks at 7:05 p.m. The first 2,000 fans in attendance will receive a “Whistle Guy” Bobblehead, courtesy of P.C. Richard & Son. For tickets, stop by the Bethpage Ballpark Box Office, call (631) 940-TIXX, or CLICK HERE. Season tickets, 10-Game Mini Plans and group outings are also currently available by calling (631) 940-DUCK.