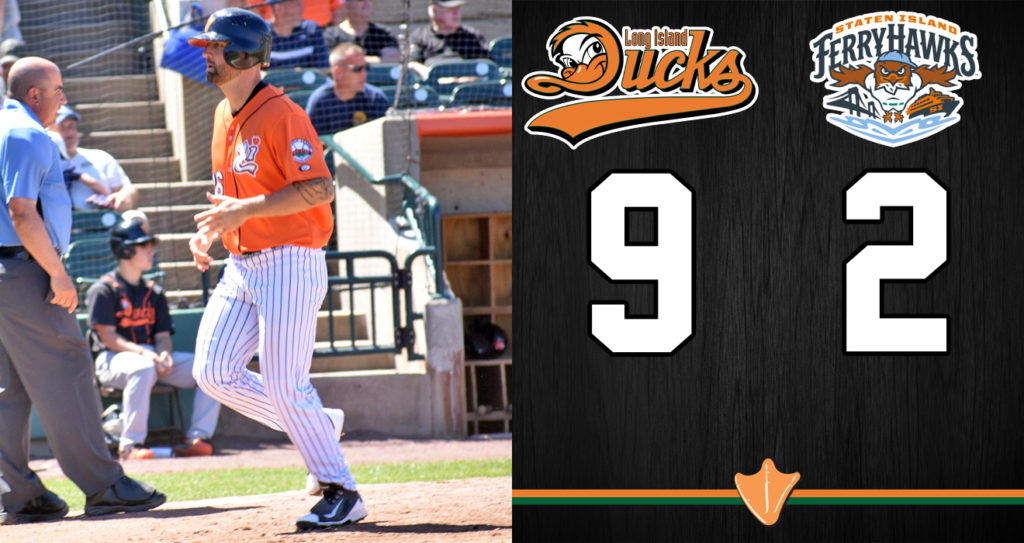 Sam Travis gave the Ducks a 2-0 lead in the first inning with a two-run double to center field off FerryHawks starter Anthony Rodriguez. Long Island doubled their lead to four in the third on Travis’ RBI single to left and Austin Rei’s RBI double down the left field line.

Three more runs came across for the Flock in the fourth to bump the lead up to 7-0. Another RBI single for Travis, an RBI double by Rusney Castillo and a sac fly off the bat of Joe DeCarlo did the damage.

Staten Island got on the scoreboard in the sixth courtesy of an RBI fielder’s choice form Javier Betancourt and a run-scoring throwing error. However, Rei scored on a fielding error in the bottom of the frame, and DeCarlo added an RBI single to left in the seventh, restoring the seven-run cushion at 9-2.

The Ducks continue their homestand on Tuesday night when they open a three-game series against the York Revolution. Game time is slated for 6:35 p.m., with the Fairfield Properties Ballpark gates opening at 5:35 (5:20 for full season ticket holders). It’s a Triple Play Tuesday at the ballpark! If the Ducks turn a triple play during the game, one lucky fan will win $25,000. Simply sign up prior to first pitch at the Ticket Kiosk on the main concourse to be eligible. Right-hander Anderson DeLeon (2-1, 3.73) gets the start for the Ducks against Revolution righty Jorge Martinez (2-4, 3.66).