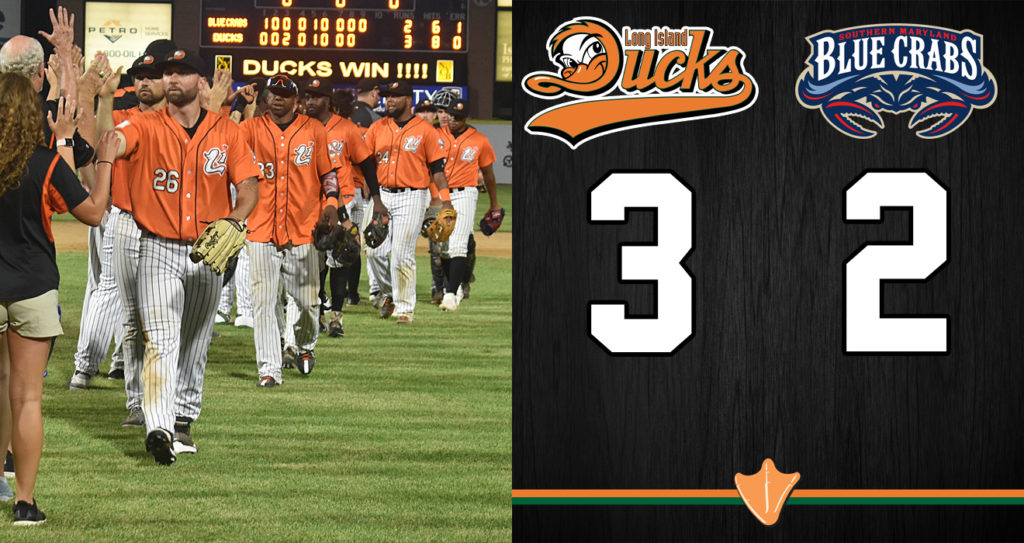 (Central Islip, N.Y., July 23, 2022) – The Long Island Ducks defeated the Southern Maryland Blue Crabs 3-2 on Saturday night in the middle game of a three-game series before a past-capacity crowd of 7,011 at Fairfield Properties Ballpark.

Southern Maryland took a 1-0 lead in the first inning on Alex Crosby’s RBI single to right field off Ducks starter Stephen Tarpley. Long Island jumped in front in the third on a two-run home run to left-center by L.J. Mazzilli off Blue Crabs starter Mitch Lambson. Jack Sundberg’s RBI single to center in the fifth tied the ballgame at two apiece. However, a Sam Travis RBI double down the left field line in the bottom of the frame put the Ducks back in front 3-2.

Tarpley (4-4) earned the win, tossing five innings of two-run ball, allowing four hits and two walks while striking out four. Lambson (5-6) took the loss, giving up three runs on eight hits and three walks over six and two-thirds innings with two strikeouts. Edubray Ramos picked up his first save of the season with a 1-2-3 ninth inning.

Alejandro De Aza led the Flock at the plate with two doubles, a run and a walk. Carlos Castro also collected a hit and reached base safely three times.

The Ducks and Blue Crabs wrap up their three-game series on Sunday evening. Game time is slated for 5:05 p.m., with the Fairfield Properties Ballpark gates opening at 4:05 (3:50 for full season ticket holders). The first 1,000 fans in attendance will receive Ducks Baseballs, courtesy of Yellow Dog Lawn Care. It’s a Sunday Family Funday, presented by Bethpage Federal Credit Union! Prior to the game, fans will be invited down for a Catch on the Field from 4:10 to 4:30. After the game, fans of all ages are also invited to take part in Kids Run the Bases. Right-hander Akeel Morris (4-6, 4.94) toes the rubber for the Ducks against Blue Crabs righty Eddie Butler (7-2, 4.67).