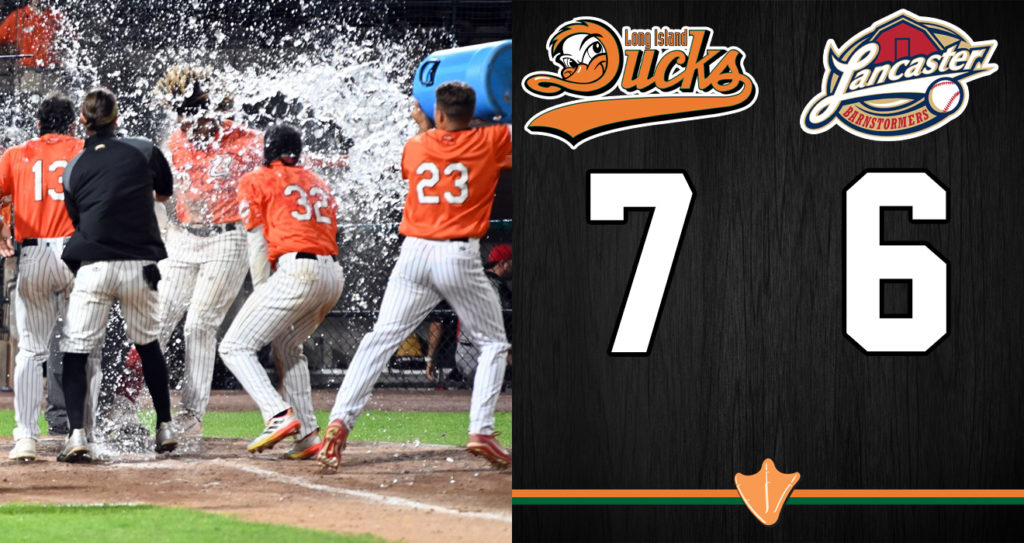 (Central Islip, N.Y., Aug. 30, 2022) – The Long Island Ducks defeated the Lancaster Barnstormers 7-6 in waddle-off fashion on Tuesday night in the opener of a three-game series at Fairfield Properties Ballpark.

Long Island took a 1-0 lead in the second inning on L.J. Mazzilli’s RBI single to right field off Barnstormer starter Cameron Gann. A four-run third inning extended the lead to five. An RBI single by Joe DeCarlo, a two-run single by Dustin Woodcock and a sac fly to left off the bat of Phil Caulfield highlighted the inning.

DeCarlo added a solo home run to left in the fifth to make it a 6-0 ballgame. Lancaster rallied for six runs in the ninth to tie the game at six. A bases loaded walk to Chris Proctor, a two-run single by Colton Shaver, a run-scoring error, an RBI groundout by Jake Hoover and a sac fly off the bat of Trace Loehr did the damage. However, Jose Sermo won the game for the Flock in the bottom of the ninth with a massive one-out solo homer to right field.

Neither starter factored into the decision. James Varela tossed five innings of one-hit, shutout baseball, allowing three walks while striking out two. Gann surrendered five runs on six hits and five walks in just two innings with two strikeouts. Matt Carasiti (1-0) picked up the win despite allowing two runs (one earned) on a hit and a walk in the ninth. West Tunnell (5-1) took the loss, surrendering the walk-off homer to Sermo in the ninth.

The Ducks and Barnstormers continue their three-game set on Wednesday night. Game time is slated for 6:35 p.m., with the Fairfield Properties Ballpark gates opening at a special time of 4:30 for a Blind Baseball Exhibition Game between the Long Island Bombers and the Lion’s Club of Suffolk County, with first pitch slated for 4:45 p.m. It’s also a Lemonade Stand at Main & Vine Wine Down Wednesday, and all fans will be welcome to visit the Duck Club restaurant/bar to enjoy a wine tasting event of featured products. It’s a Waddle In Wednesday at the ballpark as well, and fans will be able to purchase QuackerJack Bobbleheads for just $20 (normally $25) in the Waddle In Shop throughout the ballgame. Right-hander Akeel Morris (5-9, 5.75) takes the mound for the Ducks against Barnstormers righty Brooks Hall (3-1, 2.74).