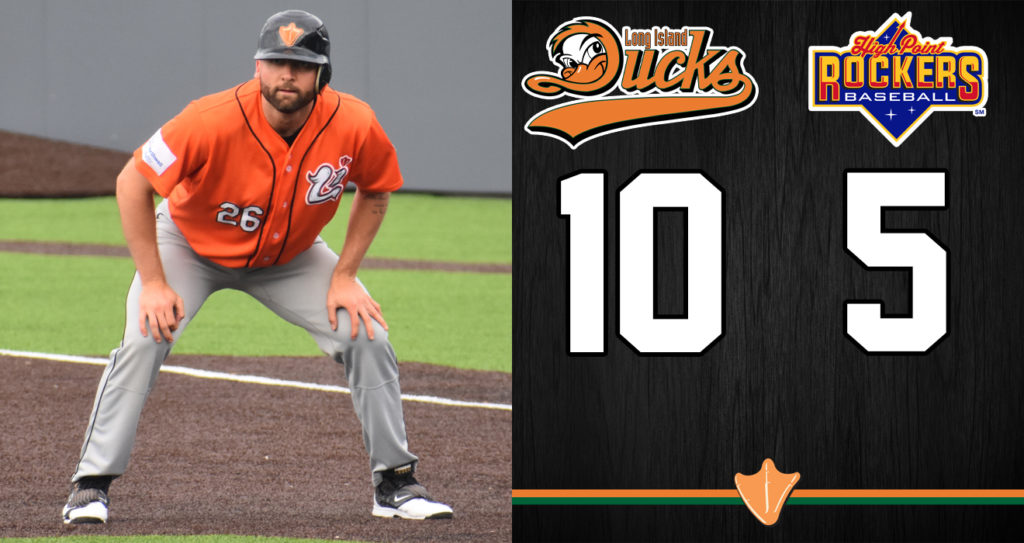 (High Point, N.C., June 14, 2022) – The Long Island Ducks defeated the High Point Rockers 10-5 on Tuesday night in the opener of a three-game series at Truist Point.

Zander Wiel put the Rockers in front early with a two-out, three-run home run by Zander Wiel in the first inning off Ducks starter Akeel Morris. An RBI infield single to third by Mike Gulino in the third extended the Rockers lead to 4-0.

The Ducks sent 13 men to the plate in the fourth inning and scored seven runs to take a 7-4 lead. A three-run homer to left by Rusney Castillo and a two-run single by Sam Travis highlighted the inning. Travis added a solo homer to the left of the batter’s eye in center field in the sixth, extending Long Island’s advantage to four. Deven Marrero lifted a sac fly to right in the seventh to make it a 9-4 ballgame.

Rockers starter Kyle Mott did not factor into the decision but lasted three innings, yielding two runs on five walks with two strikeouts. Morris (2-4) picked up the win, tossing five innings, allowing four runs on seven hits and three walks while striking out three. Joe Johnson (0-1) suffered the loss, surrendering five runs on two hits and two walks in two-thirds of an inning.

The Ducks and Rockers continue their three-game series on Wednesday night. First pitch is scheduled for 6:35 p.m. at Truist Point. Fans can follow all the action on the Long Island Ducks Broadcast Network. Live streaming HD video and audio will be available via BoxCast on LIDucks.com as well as on the Ducks official Facebook page and YouTube channel. Right-hander Joe Iorio (5-0, 3.58) takes the mound for the Ducks against Rockers lefty Jonah Scolaro (Pro Debut).