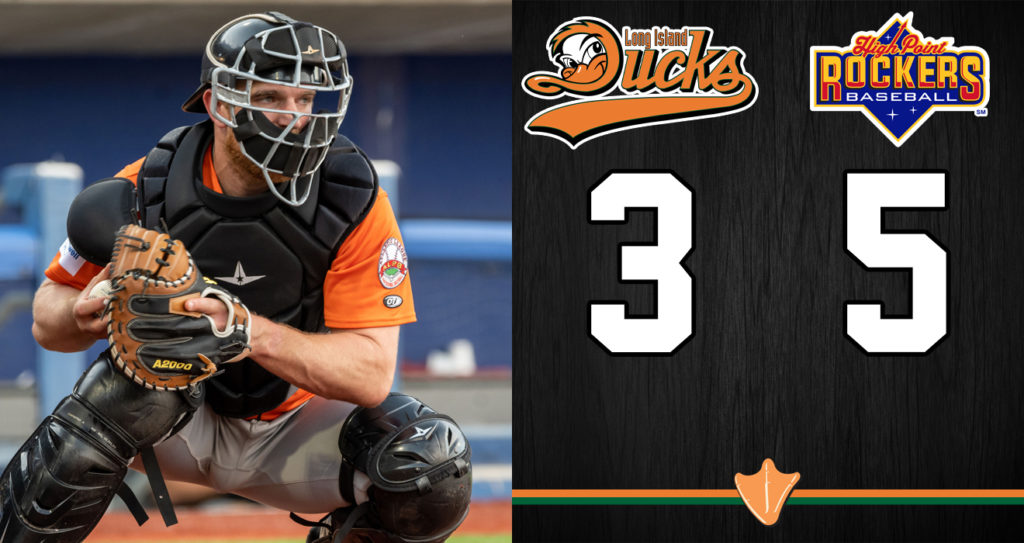 (High Point, N.C., May 5, 2022) – The Long Island Ducks were defeated by the High Point Rockers 5-3 on Thursday night in the final game of a three-game series at Truist Point.

Zander Wiel put the Rockers ahead in the first inning with a two-run home run to left field off Ducks starter Scott Harkin. It stayed that way until the fourth when the Ducks took a 3-2 lead on L.J. Mazzilli’s run-scoring groundout and Joe DeCarlo’s two-run single off Rockers starter Brady Lail. Long Island kept the lead until the sixth when Johnny Field’s three-run homer to left-center put High Point back in front 5-3.

Lail (2-1) earned the win, tossing six innings, allowing three runs (one earned) on five hits and one walk while striking out four. Harkin (1-1) took the loss, giving up five runs on eight hits and three walks in five innings with two strikeouts. Chasen Bradford picked up his third save of the season with a scoreless ninth.

The Ducks return home on Friday night to begin a three-game set against the Lancaster Barnstormers. Game time is slated for 6:35 p.m., with the Fairfield Properties Ballpark gates opening at 5:35 (5:20 for full season ticket holders). It’s an Angela’s Pizza Friday, and a player on the Barnstormers will be designated as the K-Man. If he strikes out during the game, all fans can show their game ticket to receive 20% off their order of $25 or more throughout the rest of the weekend at Angela’s Pizzeria of Islip. Right-hander Hunter Caudelle (1-0, 5.40) gets the start for the Ducks against Barnstormers righty Nile Ball (0-0, 1.50).