SOLID PITCHING ACROSS THE BOARD FOR DUCKS IN WIN OVER FERRYHAWKS 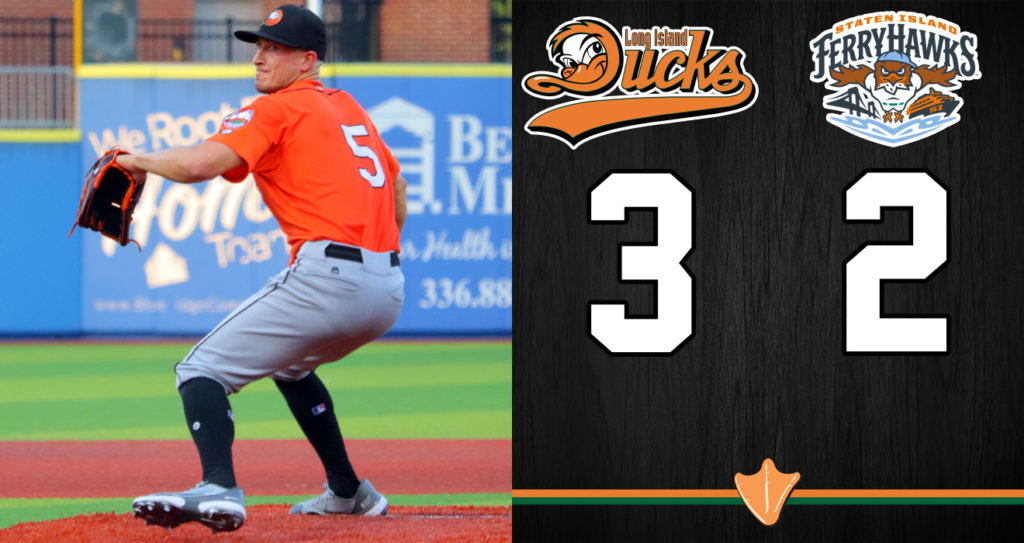 The FerryHawks took a 1-0 lead in the bottom of the first against Ducks starter Joe Iorio thanks to a leadoff solo home run to right field off the bat of Antoine Duplantis. The Ducks tied the game at one apiece just one-half inning later versus FerryHawks starter Anthony Rodriguez thanks to a booming run-scoring double to the wall in left center field produced by Carlos Castro that plated Deibinson Romero after he led off the frame with a walk.

Staten Island jumped back out in front 2-1 in the fourth on Christopher Cespedes’ first hit in a FerryHawks uniform as he drove home Angel Aguilar with an RBI base knock to the opposite-field in right. Long Island fought back to score two runs in the sixth as they took a 3-2 advantage thanks to a sacrifice fly courtesy of Dustin Woodcock that plated Sam Travis after he led off the inning with a base hit, while the eventual winning run scored one batter later as Joe DeCarlo singled to left with Romero at second and eventually hustling home and sliding in safely following an error committed by Cespedes in left. The Flock bullpen did the rest, as the duo of Jose Jose and Tyler Webb shut the door on any potential FerryHawks comeback by firing two scoreless innings on four strikeouts, with Webb closing out the game as the southpaw registered his team-best tenth save of the campaign.

Iorio (7-4) registered the win, allowing just two runs on four hits (one home run) in seven innings pitched, walking four while striking out two as the right-hander notched his sixth quality start in 2022 and third versus Staten Island. Rodriguez (4-6) was tagged with the loss, surrendering three runs (two earned) on seven hits in five and two-thirds innings of work, walking four batters. Travis and Phil Caulfield led the way offensively with a pair of hits apiece.

The Ducks and FerryHawks conclude their three-game set on Thursday night. First pitch is scheduled for 6:30 p.m. at Staten Island University Hospital Community Park. Fans can follow all the action on the Long Island Ducks Broadcast Network. Live streaming HD video and audio will be available via BoxCast on LIDucks.com as well as on the Ducks official Facebook page and YouTube channel. Left-hander Bennett Parry (0-1, 5.95) toes the rubber for the Ducks against FerryHawks righty Dakota Freese (1-7, 4.09).