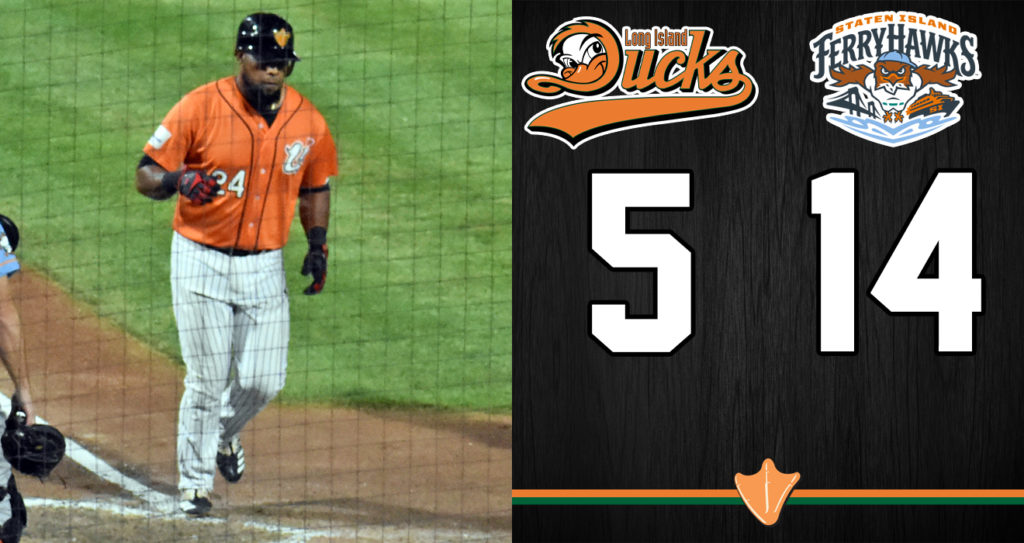 (Central Islip, N.Y., Aug. 18, 2022) – The Long Island Ducks were defeated by the Staten Island FerryHawks 14-5 on Thursday night in the rubber game of a three-game series at Fairfield Properties Ballpark.

The Ducks struck first in the opening inning when Phil Caulfield scored on a single by Jose Sermo, coupled with a fielding error. Staten Island answered with four runs in the second off Ducks starter Stephen Tarpley on Joseph Monge’s RBI single, Justin O’Conner’s RBI double and a two-run double by Javier Betancourt. A two-run home run to left field by Christopher Cespedes in the third extended the FerryHawks lead to 6-1.

An RBI single by Bryan Gonzalez and a bases loaded walk by O’Conner in the fifth inning made it an 8-1 ballgame. Deibinson Romero launched a grand slam to left field off FerryHawks starter Matt Solter in the bottom of the fifth, closing the gap to 8-5.

The Ducks hit the road on Friday night to open a three-game series against the York Revolution. First pitch is scheduled for 6:30 p.m. at PeoplesBank Park. Fans can follow all the action on the Long Island Ducks Broadcast Network. Live streaming HD video and audio will be available via BoxCast on LIDucks.com as well as on the Ducks official Facebook page and YouTube channel. Right-hander Akeel Morris (4-9, 6.08) gets the start for the Ducks against Revolution lefty Ben Herrick (0-0, 0.00).