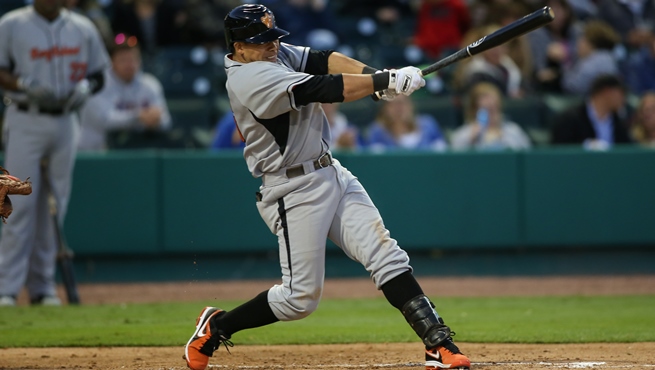 (Sugar Land, Texas, April 20, 2013) – The Long Island Ducks were defeated by the Sugar Land Skeeters 5-4 in 11 innings on Saturday night in the third game of a four-game series at Constellation Field.

Long Island jumped out to a 4-0 lead with two runs in the first and two in the second off Skeeters starter Scott Elarton. A pair of RBI singles by Ray Navarrete, Adam Bailey’s run-scoring groundout and a RBI single from Ramon Castro did the damage. Sugar Land answered with three in their half of the second against Ducks starter Matt Way on a RBI double by Travis Scott, a run-scoring wild pitch and a RBI fielder’s choice off the bat of Anthony Granato.

Sugar Land tied the game in the fifth as Chase Lambin scored from third on a throwing error by Bryant Nelson. Both sides would continue to trade zeroes until the bottom of the 11th when Dustin Martin singled, moved to second on a sacrifice bunt and scored on Josh Barfield’s fielding error to give the Skeeters the win.

Neither starter factored into the decision. Way yielded three runs on two hits and six walks in two innings of work while Elarton lasted just one and one-third inning, surrendering four runs (three earned) on six hits. Roy Corcoran (1-0) got the win after throwing a scoreless top of the 11th, and Connor Graham (0-1) took the loss, yielding a run on two hits in one and one-third innings of relief.

Navarrete led the Ducks with three hits and two RBI at the plate.

Long Island and Sugar Land wrap up the four-game set on Sunday afternoon. Game time is slated for 2:35 EDT from Constellation Field. Right-hander Nick DeBarr takes the mound for the Ducks against Skeeters righty Sean Gallagher. Fans can follow all the action live on the radio home of the Ducks, 103.9-FM WRCN and online by CLICKING HERE, with Michael Polak calling the play-by-play.

The Ducks return home on Friday, April 26 for the 2013 home opener against the Skeeters. First pitch is set for 7:05 p.m., with the Bethpage Ballpark gates opening at 6:05. The first 1,500 fans in attendance will receive Replica Championship Rings, courtesy of P.C. Richard and Son. Prior to the game, the Ducks will also host a Championship Ring and Banner Raising Ceremony to celebrate the team’s 2012 Atlantic League championship. Fans are asked to be in their seats by 6:30 to enjoy this special moment in Ducks history.

Tickets for the game and all Ducks regular season home games are now on sale. Fans can purchase their tickets by visiting the Bethpage Ballpark box office, calling 631-940-TIXX or by CLICKING HERE.