TAKE THE FERRY THIS WEEKEND 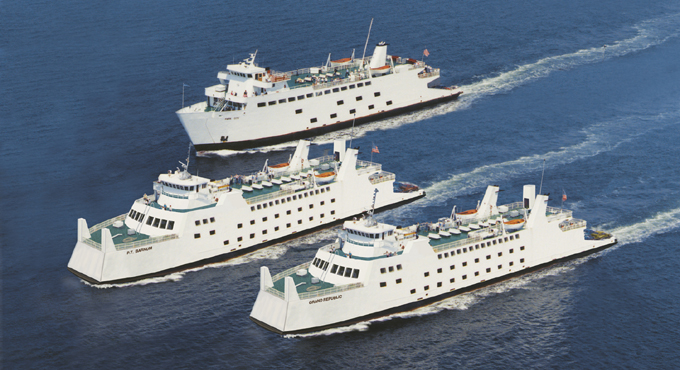 
(Central Islip, N.Y., July 10, 2012) – The First Half Liberty Division champion Long Island Ducks kick off the second half of the 2012 season in Bridgeport this weekend against the cross-Sound rival Bridgeport Bluefish. In addition to the continued Ferry Cup Series match-up, fans can also take advantage a special offer from the Bridgeport and Port Jefferson Steamboat Company.

To allow the fans easier, more affordable access to this unique rivalry, the Bridgeport and Port Jefferson Steamboat Company will be offering a special ticket package for Ferry passengers July 13-15. Fans can purchase a special package that includes a walk-on round trip fare aboard the Ferry, a ticket to the Ducks-Bluefish game at The Ballpark at Harbor Yard, and $5 of Bluefish Bucks (ballpark dollars) for use on merchandise, concessions or games at the ballpark. Fans can purchase their special offer for just $30 (adults), $25 (seniors) and $12 (children 12 and under). All children three and under are free. In order to take advantage of this offer or for more information, please contact the Port Jeff Ferry tour department at 631-473-5138.

In addition, Ducks mascot, QuackerJack, will be riding the Ferry over to Bridgeport with Ducks fans on the Noon boat on Sunday. QJ will be signing autographs, posing for pictures and helping pump fans up for the game that afternoon. Return ferries back to Port Jefferson will be available until 10:00 p.m. on Sunday.

The Ducks and Bluefish have battled for the Ferry Cup since 2009, with the Ducks holding a 2-1 lead after claiming the cup in 2009 and 2011. So far this season, the Bluefish lead the series 6-4, but the Ducks will be looking to begin their quest for a second consecutive second half title in the Liberty Division. Long Island won six of nine games in Bridgeport last season.

Despite playing in different states, the Bluefish and Ducks are separated by just a 14-mile expanse of the Long Island Sound between Bridgeport and Port Jefferson. Rather than taking the long way around, the teams take the one-hour ferry ride across the Sound when visiting the other’s ballpark. This unique method of travel, as well as the near-annual battles between the two teams for division supremacy, has made the cross-sound rivalry the fiercest and most hard-fought in the league.