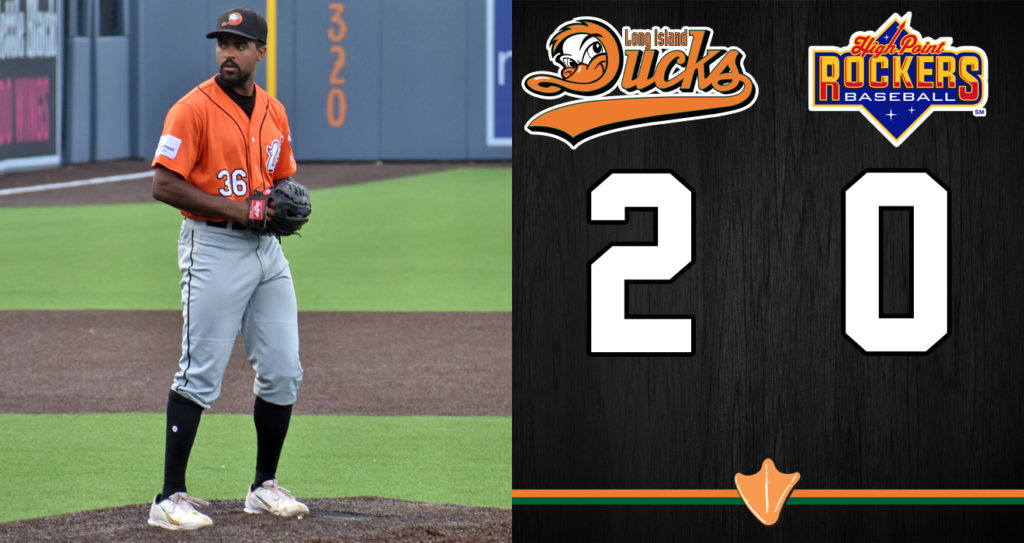 (High Point, N.C., June 16, 2022) – The Long Island Ducks shut out the High Point Rockers 2-0 on Thursday night in the rubber game of a three-game series at Truist Point.

Both teams exchanged zeroes until the top of the sixth when the Ducks plated two runs off Rockers starter Craig Stem. Dustin Woodcock’s leadoff solo home run to left-center and Deibinson Romero’s two-out RBI single to left gave the Flock a 2-0 lead.

That was all Ducks starter Stephen Tarpley (1-3) needed to earn the win. The southpaw fired eight scoreless innings, allowing just one infield single and one walk while striking out seven batters. Stem (0-2) took the loss, giving up two runs on five hits and a walk over six innings with one strikeout. Nick Goody collected his first save with the Ducks after striking out the side in a perfect ninth inning.

The Ducks return home on Friday night to begin a three-game series with the Wild Health Genomes. Game time is slated for 6:35 p.m., with the Fairfield Properties Ballpark gates opening at 5:35 (5:20 for full season ticket holders). The first 1,500 fans in attendance will receive Ducks Beach Towels, courtesy of Enzo. It’s also an Angela’s Pizza Friday! A player on the Genomes will be designated as the K-Man, and if he strikes out during the game, all fans can show their game ticket to receive $10 regular pies (normally $19) throughout the rest of the weekend at Angela’s Pizzeria of Islip. Right-hander Scott Harkin (3-4, 4.26) gets the start for the Ducks against Genomes righty Elih Villanueva (3-4, 5.63).