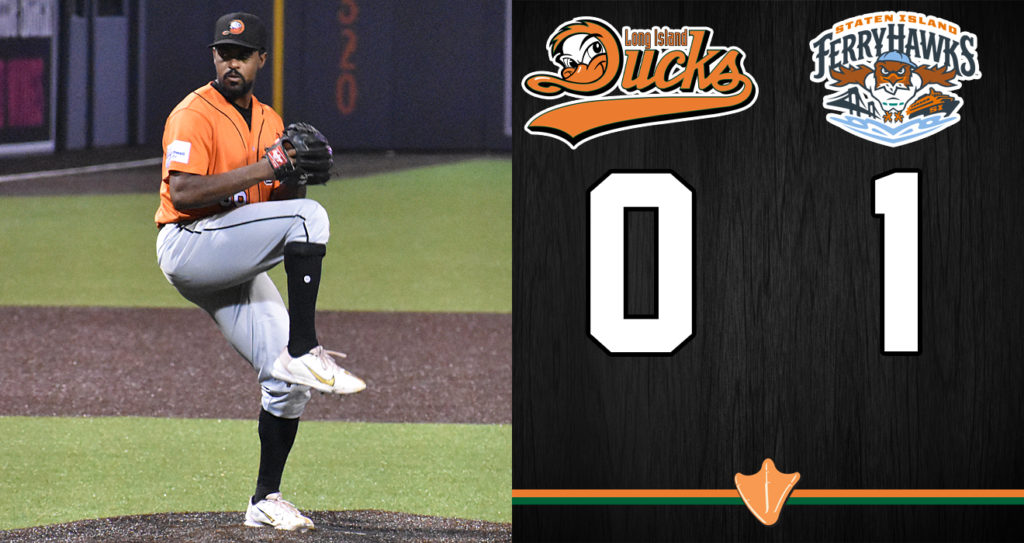 (Staten Island, N.Y., June 10, 2022) – The Long Island Ducks were defeated by the Staten Island FerryHawks 1-0 on Friday night in the opener of a three-game series at Staten Island University Hospital Community Park.

Neither starter factored into the decision. Stephen Tarpley fired seven scoreless innings for the Ducks, allowing just two hits and two walks while striking out 10 batters. Anthony Rodriguez lasted five innings for the FerryHawks, yielding no runs on three hits and five walks with two strikeouts.

The only run of the ballgame scored in the bottom of the ninth. Staten Island loaded the bases with two outs on two infield singles and a walk before Yunior Santana’s RBI single to center field won it the FerryHawks.

Eddy Reynoso (3-2) earned the win with three scoreless innings of relief, yielding a hit while striking out two. Kai-Wei Lin (0-1) suffered the loss, conceding the winning run on three hits and a walk in two-thirds of an inning with two strikeouts.

The Ducks and FerryHawks continue their three-game series on Saturday night. First pitch is scheduled for 6:00 p.m. at SIUH Community Park. Fans can follow all the action on the Long Island Ducks Broadcast Network. Live streaming HD video and audio will be available via BoxCast on LIDucks.com as well as on the Ducks official Facebook page and YouTube channel. Right-hander Scott Harkin (3-3, 4.60) takes the mound for the Ducks against FerryHawks righty Anthony Auletta (1-0, 7.36).