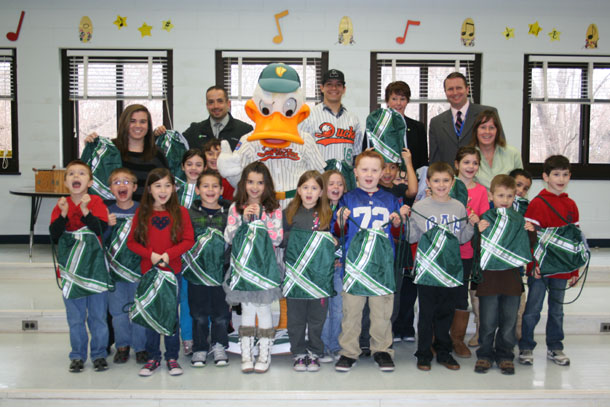 
(West Islip, N.Y., Jan. 17, 2012) –
On Tuesday, the Long Island Ducks spent the morning with Michelle Holub and all of her classmates at Paul E. Kirdahy Elementary School at Captree in West Islip. Michelle was the fourth and final winner in TD Bank’s annual “Take a Duck to Class” essay contest, and as part of her prize, she received an assembly for all of the second graders with the “Best Mascot on Long Island,” QuackerJack, and the “Best Long Island Duck,” Ray Navarrete.

The assembly started just before 10:00 a.m. when all of Michelle’s classmates congratulated her for submitting a winning essay and then had Michelle read her winning essay aloud to the entire class. Next, TD Bank’s Vice President of US Field Marketing for Suburban New York Eric Fishon and Assistant Vice President/West Islip Store Manager Lisa D. Guariglia presented the lucky winner with a $25 Visa gift card for her great essay. QuackerJack was then introduced to a loud applause before Ray spoke to all of the children about his career, the importance of community, and always believing in your dreams. Following some pictures, each student in Michelle’s class was given a gift bag full of goodies, courtesy of TD Bank, and treated to a special autograph session with QuackerJack and Ray. It was another fun-filled day in the community with the Ducks.

Contestants in TD Bank’s “Take a Duck to Class” were able to pick up applications from local TD Bank locations and submit an essay on “Why my community is important to me.” Out of hundreds of essays received from all over Long Island, four winners were selected.  Each winner receives a visit from a Ducks player and Long Island’s most popular mascot, QuackerJack, along with a Visa gift card from TD Bank. Each student in the winner’s class receives a gift bag, courtesy of TD Bank.

Once again, here are the four winners of TD Bank’s “Take a Duck to Class” essay contest for this year:
Kyersten Frabizio – Medford Elementary School
Daniel Papillo – Forest Avenue Elementary in West Babylon
Daniel Dunlap – Jennie E. Hewitt Elementary in Rockville Centre
Michelle Holub – Paul E. Kirdahy Elementary at Captree in West Islip
The Ducks will be announcing the start of next year’s essay contest during the 2012 baseball season. Keep checking www.liducks.com for more information on how to enter for a chance to have QuackerJack and a Ducks player come visit your school.