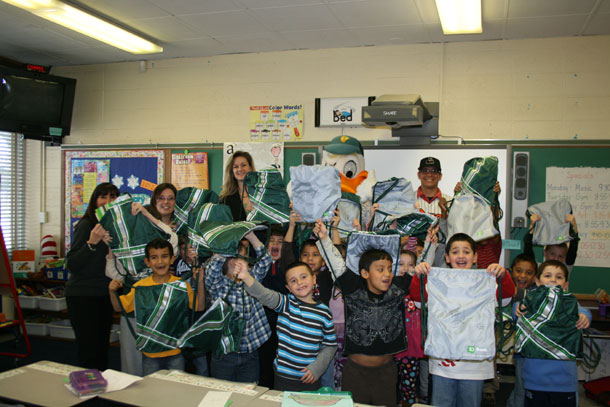 
(West Babylon, N.Y., Jan. 5, 2012) –
On Thursday, the Long Island Ducks spent the morning with Daniel Papillo and all of his classmates at Forest Avenue Elementary School in West Babylon. Daniel was the second of four winners in TD Bank’s annual “Take a Duck to Class” Essay Contest, and as part of his prize, he received an assembly for all of the first graders with QuackerJack and Ducks all-time hits leader Ray Navarrete.

The assembly kicked off at 11:00 when TD Bank representatives Eric Fishon and Jennifer Kelly presented Daniel with a Visa gift card. Daniel then read his winning essay aloud to the entire first grade class and proclaimed, “The Ducks are the best team I know!” QuackerJack then came out to say hello to the class and Ray spoke to the children about the importance of community and how “you must always believe in yourself and never give up on your dream.” Finally, each student was given a gift bag full of goodies, courtesy of TD Bank, back in Daniel’s classroom, and the entire class was treated a special autograph session with QuackerJack and Ray. Special members of the media were also there to capture all of the fun.

Check out the video below from Newsday!


Check out the video below from TV 55!


TD Bank’s “Take a Duck to Class” contestants were able to pick up applications from local TD Bank locations and submit an essay on “Why my community is important to me.” Out of hundreds of essays received from all over Long Island, four winners were selected.  Each winner receives a visit from a Ducks player and Long Island’s most popular mascot, QuackerJack, along with a Visa gift card from TD Bank. Each student in the winner’s class receives a gift bag, courtesy of TD Bank.

Following is a listing of the two remaining essay contest winners and their scheduled visit dates: